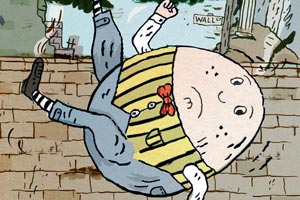 One spring afternoon on the patio of a comfort-food spot in Austin, Texas, a jovial, elfin-looking Internet entrepreneur named Thor Muller declared, “I’m a collapsitarian.”

The patio was jammed with exuberantly Twittering adults, crisp businesspeople, and rumpled hacker types, in town for the South by Southwest (SXSW) Interactive conference. Muller took his place at a round table, ordered iced tea, and waved over Lane Becker, his rakish partner in a San Francisco customer-service firm. Adrenaline rising, I geared up. The indulgence of an all-out cosmological discussion is somehow permissible only during an out-of-town conference, like a one-night stand or ranch dressing.

Becker, Muller explained, was also a collapsitarian. Becker announced he was short on cash—he’d maxed two credit cards the night before with a $14,000 bar tab. Wow. I didn’t bother to conceal my admiration. “James Howard Kunstler and Dmitry Orlov are also collapsitarians,” Muller went on, citing gurus with a fondness for apocalyptic scenarios. Collapsitarianism, I gathered, involves a desire for complete economic meltdown.

As Becker passed the hat for lunch money, Muller filled me in. The term surfaced in a January New Yorker piece that quoted Kunstler, author of the peak-oil treatise The Long Emergency and a survivalist novel, World Made by Hand. (Despite the gist of his work, Kunstler now claims he’s “never been any kind of ‘collapsitarian,’ period.”)

The idea nevertheless took flight among bloggers, notably Kevin Kelly of Wired. Hardcore collapsitarians, these writers purport, agitate for total economic downfall and universal joblessness; they scoff at mere predictions of catastrophe and apotheosis, demanding their doom, ashes, and phoenix-rise right away. They’d like to see the dilapidated systems of America’s beleaguered economy—finance, for one, but also retail—burn to the ground so that something new, brighter, and more durable might appear. These old ways, they contend, will self-destruct because of intrinsic design flaws, particularly the creaky command-and-control structures of the pre-Internet era. At lunch, Becker name-checked All That Is Solid Melts Into Air, Marshall Berman’s modernist critique.

To its adherents, collapsitarianism suggests a giddy liberation from hope, from futile shoring up of ailing economies like Detroit’s and the Sunbelt’s, from bailouts and stimulus plans and climate change and toxic-asset recovery. On board are said to be Luddites, anarchists, survivalists, green types who see collapse as our comeuppance, critics of American exceptionalism, and even financial-sector employees who just want it all over already.

As Muller ticked off the four sectors he expected­—no, hoped—would disintegrate, I felt drunk. Finance, insurance, manufacturing, retail: R.I.P. (What? No journalism? I took a deep breath.) Partly I was high on the mere mention of collapse, that unspeakable notion—and the tantalizing prospect that it might be advocated. I imagined Victorians felt this way hearing about psychoanalysis: Sex, the feared thing, could finally be not only spoken of, but actually embraced. “It’s good news,” Muller explained. “We’re squeezing the industrial era out of our system. Perceived value is collapsing, leaving only real value.”

Like many, I do my fair share of fantasizing about sweeping away the phonies. Yet the “real value” line also recalled the rhetoric of goldbugs at the close of the 19th century; they wanted to purge the nation of postwar fiat cash and eliminate fluctuations in the currency, along with America’s profligate ways. They were rich, mostly, and imagined big money-supply contractions that would keep stacks of gold bars expensive and out of reach, so that only responsible, dignified people—high-hatted men like themselves—could get at them. A moralizing and ungenerous note sounded in the SXSWers’ end-of-world talk. People with devalued dollars and flimsy condos, after all, hardly deserve to perish for their illusions. But I bit back my reservations to bask in the thrill of a new idea.

Becker persuaded Muller to cover his lunch, and he tucked into a massive chicken-fried steak. Collapsitarianism amused him, but he really wanted to talk about their company, Get Satisfaction—how impressively capitalized it was, how it let people swap info about companies and allowed companies to talk directly to their customers.

Muller persisted. We have to let collapse come, he told me, and even nudge it along. “If you see Humpty Dumpty sitting on a wall, go ahead and give him a good shove,” he elaborated later. Once all the rotten and fragile stuff falls to pieces, hardier and healthier and more reasonable ways of organizing experience will emerge, he promised. Collapse sounds scary, but Muller considers it a desirable stage en route to a “more delightful, more sustainable world.”

I wanted to know about this world that would appear when finance and other totems lay in ruins. Was it millennialism 2.0? Was it different than the off-grid hippies who frolic in Mendocino or the Randian Going Galt movement favored by Fox News pundits? (See “And the Rand Played On.”) Muller obliged. Community gardens, wiki projects, DIY and repair and lending culture—all antidotes to disposability—are hallmarks of what’s to come, he told me. Muller uses his iPhone apps for real-world tasks, making the device a level for hanging pictures or a candle for birthday celebrations. This struck him as quite postapocalyptic. He also counted customer communities and their stewards among those who would last.

Wait. Customer communities? Where had I heard that before—just minutes before?

I shot a look at Becker. Get Satisfaction builds customer communities. Had I been had? Sectors might crumble, Humpty Dumpties might shatter, but a Sand Hill Road favorite that lets customers chat about Whole Foods—that would endure. Everything clicked. It was all a sales pitch. And don’t millennialists always look to the end-times because they believe they’re the chosen ones? This was Rapture talk.

Muller told me he’d derived his account of the end of the old-economy sectors from Umair Haque, a “prophet-economist,” in Muller’s words, who had outlined what he called “the Great Compression” at BRITE, a branding and technology conference held in New York City in March. I later read some of Haque’s work, lately done on behalf of a strategic advisory company called Havas Media Lab. Its clients are entrepreneurs and investors, who no doubt pay good money for his perversely inspirational talk about how to find gold in the rubble. But it was sheer conference palaver—”outcomes, not income…connections, not transactions”—hardly prophecy or even economics. BRITE, TED, Davos, SXSW, Ignite: the immovable feasts of the great religio-business calendar, where dapper gents with bubbles and sparkles on their business cards exchange triumphalist ideas by day and then charge $14,000 in drinks by night. What are these conferences, actually, but a relic of the boom days of branding and tipping points and other nifty PowerPointisms? Maybe they even caused the recession. And now collapse is a meme, and DIY a meme—just as the free market was a meme—that raises the tide for some, even as it exists to drown others.

Nowhere in the course of this collapsitarian spiel did there seem to be more than a cursory acknowledgment of the misery of mass unemployment and the vertigo that would befall a nation deprived of the foundations of its economy and cultural identity. I was further bugged by the realization that none of these collapsitarians is a disinterested academic. They all come from the land of business 2.0 bigthink. Even Dmitry Orlov, who lives on a boat with stockpiled propane and espouses bourgeois survivalism, works in advertising.

You may like the idea of pushing eggs off walls, using Freecycle, and getting the most out of your apps. But don’t be fooled: This new collapsitarian scene comes courtesy of the same people who evangelized for the Brand of You and Irrational Rationalism and the bull market. Their proof of concept is only ever that they themselves are rich. And while that’s hard to refute—and really, you look like a resentful nut if you don’t acknowledge that people with capital are onto something—that something is probably not our next great history-altering idea. Isn’t it more likely that they just know how to ask for money?

Muller and Becker ask beautifully, and you can’t help but like them. I paid for my share of the comfort food and got up from the table. I would stay in touch, I believed. Muller was going to speak at Ignite, and I planned on studying his speech, titled “We’re All Collapsitarians Now!” I resolved never to tell the pair that I doubted their reasoning, their philosophy, their motives. And why was I being so circumspect? Well, because as much as I bridled, they were just so damn convincing.

Maybe, after the collapse, they’d consider hiring me.