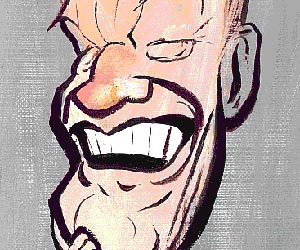 The Moment of Truth is here. For years a national health plan has been a dream. Now it is coming. The level of pain is too high and all the forces of the Medical Industrial Complex cannot overcome the collective will. Or so it seems.

Meanwhile, back on K Street, the armies of the Empire are massing and greasing politicians like mad. Max Baucus, chair of the Finance Committee in the Senate, has been funded by Big Med for years. This from the Montana Standard.

As Sen. Max Baucus has taken the lead on health-reform legislation in the U.S. Senate, he’s also become a leader in something else: Campaign money received from health- and insurance-industry interests.

In the past six years, nearly one-fourth of every dime raised by Baucus, D-Mont., and his political-action committee has come from groups and individuals associated with drug companies, insurers, hospitals, medical-supply firms, health-service companies and other health professionals.

House and Senate committees have voted out bills that will allow for a public option for people to choose along with (perhaps newly competitive) corporations. Baucus has said he will oppose a public option. Obama now seems to be toughening. The new definition of bipartisanship seems to be that the suggestions from Republicans that get included in the bill will count as cooperation from them. NOT NECESSARILY THEIR VOTES. It has to be accepted now that there will be almost no Republican votes. And the Dems have the numbers to go for this, if they have the guts as well.

Here’s a part of Amy Goodman’s great interview with Wendell Potter, formerly of Cigna, who blows the whistle on the whole infuriating industry. He refers to their methods as “dumping the sick.” This marvelous story of how the high-flying Big Med exec. sees the truth and gradually has a kind of conversion pilgrimage. Worth your time. As would be a card to an actual senator, especially if yours is on the fence on this.

Here’s the NY Post‘s funny take yesterday. “Successful” means earning over $280,000. I guess that would classify most of us as unsuccessful. This tax is asking the rich to return to pre-Bush rates so that everyone can be covered.