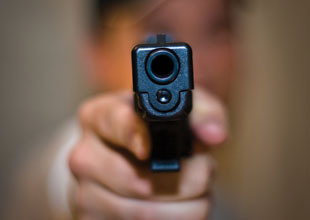 When the Department of Homeland Security warned in April that the financial crisis and Barack Obama’s election were inflaming right-wing extremists, many conservatives were outraged. But a spate of high-profile murders this year has prompted questions about whether the government should have been more proactive. In April, Richard Poplawski, a 22-year-old frequenter of white supremacist websites, was charged with fatally shooting three Pittsburgh cops. In May, former militiaman Scott Roeder was accused of gunning down abortion doctor George Tiller (he pleaded not guilty this week). In June, 88-year-old neo-Nazi James von Brunn allegedly killed an African American security guard at the Holocaust Museum in Washington, DC. Only then did the government spring into action. Later that month, federal agents in three states moved against a prominent far-right leader and his associates, with almost no attention from the national press.

At 6:45 a.m. on June 25, agents from the Bureau of Alcohol, Tobacco and Firearms (ATF) arrested Dennis Mahon on domestic terrorism charges stemming back to a crime committed more than five years ago. An indictment from a federal grand jury in Phoenix, unsealed in late June, charges Mahon with constructing a pipe bomb that exploded in Scottsdale city office that promotes racial and cultural diversity. The blast severely injured the office’s director and hurt two other staffers. Mahon and his twin brother, Daniel, were also accused of conspiring to build and send the bomb, and with disseminating training materials on domestic terrorism.

Also on June 25, the ATF arrested Robert Joos—a 56-year-old white supremacist preacher in Missouri—in connection with the Mahon investigation. According to court documents, Dennis Mahon had told an undercover agent that Joos was an expert on bomb making. (In the end, Joos was only charged with illegal possession of weapons.) On the same day, ATF agents also raided the northern Indiana home of the 71-year-old Tom Metzger, the head of White Aryan Resistance (WAR) and a longtime associate of Dennis Mahon.

Mahon has been known to the feds for many years. During my years of reporting on right-wing extremists, I’ve encountered him on several occasions, and interviewed him a couple of times. He’s known as a blustery self-promoter who likes to be the center of attention (in the aftermath of the Oklahoma City bombing, he sent reporters Christmas cards signed “the white terrorist.”)

Mahon, who is 59, is a former aircraft mechanic. He once belonged to a Klan group called the White Knights, and later joined Tom Metzger’s WAR, which advocates for racial separatism. On Metzger’s behalf, Mahon traveled to Germany in September 1991 to meet with Berlin skinheads, reporting in a newsletter that he had visited the Reichstag: “It was very inspiring to walk up the same steps that Adolph Hitler walked up…We did visit a Concentration Camp at Sachsenhausen, and had a real laugh at the wild stories and oversize photos of the ‘victims.'”

In the 1990s, Mahon and his girlfriend, Carol Howe, spent time at a religious compound in the Ozarks. At some point during this period, Howe became an ATF informant. Then, on April 19, 1995, a bomb exploded in the Alfred P. Murrah Federal Building in Oklahoma City, killing 168 people and injuring more than 600 others. During the trial of Terry Nichols, who was eventually convicted of conspiring to help carry out the attack, Howe testified under oath that she had heard Mahon advocate violent action against the government, and that she had accompanied a group from the compound on a possible expedition to case the bombing site. Mahon himself expressed support for Timothy McVeigh, who was sentenced to death for the bombing. However, he was never charged with any involvement in the attack.

For several years after that, Mahon, like many white supremacists, laid low. “After the bomb went off in Oklahoma City, the White Knights completely collapsed,” Mahon told the Kansas City Star. “They were scared to death. They just went down the hidey-hole.” But by 2004, Mahon had moved to Arizona and, according to the investigation, he was ready to take up the cause again.

The indictment says that in February that year he helped to construct a bomb, disguised it in a cardboard box, and mailed it to Scottsdale’s Office of Diversity & Dialogue. When the director, an African American named Don Logan, opened the package, it exploded in his hands. Five years later, Mahon was apprehended by the feds. The big question looming over the case is: What took them so long?