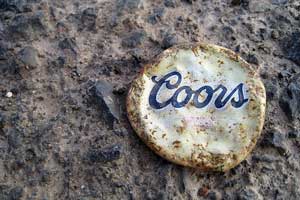 Who says the arcane job of rewriting the laws that govern hard-rock mining isn’t of interest to Joe Sixpack? Certainly not Interior Secretary Ken Salazar, who in testifying before the Senate Committee on Energy and Natural Resources today, deftly linked the reform of the nation’s mining laws to the production of better beer. “Relative to the water that was used for Coors beer,” the former Colorado Senator said, “we know that Clear Creek comes off the headwaters. . .where we have thousands of abandoned mines.”

Salazar was testifying in support of two senate bills that would end the giveaway of minerals on federal land–a federal law from 1872 still allows companies to extract gold and other minerals royalty-free–and use the money to finance the cleanup of mining sites.  An estimated 500,000 abandoned mines have contaminated the headwaters of 40 percent of the West’s streams. Cleaning them up will cost at least $32 billion.

For Salazar, citing Coors’ iconic Clear Creek was a tip of the cowboy hat to Republican brewery scion Pete Coors, whom Salazar narrowly defeated in a 2004 Senate race. For decades, the Coors family has been a major donor to conservative groups like the Heritage Foundation and John Birch Society and target of environmentalists. On several occasions, the Coors brewery in Golden, Colorado, dumped thousands of gallons of beer into Clear Creek, at one point killing up to 50,000 fish (perhaps they at least died happy). But starting in the early 1990s, Coors also began paying more attention to preserving its watershed. It joined forces with state agencies to clean up an abandoned mine along the creek and cap, grade, and replant the site.

The mining reform bill would bankroll those cleanups by requiring new mines to pay into a fund. But Salazar would like to see it go further by creating new incentives for companies such as Coors to clean up mines on their own. In 2006, he sponsored a “Good Samaritan” bill that would have allowed private interests to mop up contaminated sites without fear of being held liable for the pollutants found there. For example, in the 1990s, the State of Colorado and Coors had planned to stanch the flow from a mine tunnel that was leaching ten pounds of heavy metals into Clear Creek each day, but the state killed the project for fear of lawsuits.

Salazar’s plea for better beer through mining reform was a big hit with freshman Senator Mark Udall (D-Colo.), who has replaced him on the committee. “Your comments about Coors are particularly relevant to me, since Colorado is the number one producer of beer on a state-to-state basis,” he said. “It’s an important industry in Colorado and it’s important to all of us.”

Then the microphone was passed to Senator James Risch (R-ID), who was none too impressed. “Colorado may brew it,” he said, “but Idaho grows the barley and the hops.”