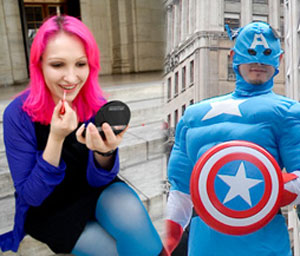 Disney isn’t the only company that thinks all girls want is some sparkly lip gloss. Since Hasbro has the edge at the box office, Marvel recently hawked costumes as summer-wear on its blog’s “Summer Style Guide.” Frankly, no self-respecting geek would think of showing up to (as they suggest) a comic con in one, but that isn’t Marvel’s only problem when it comes to understanding their fanbase:

For the young ladies out there, Marvel has partnered with Lotta Luv to create some awesome lip glosses and lip balms.

So guys get to be superheroes, and girls get to be…”perfectly pouty?” According to Lotta Luv‘s licensing coordinator, yes:

With a branded line of make-up from Marvel, girls will be able to feel as if they are going from ordinary to extraordinary just like the superhero characters in the stories.

I don’t know about you, but a mask and some Lycra makes me feel way more extraordinary than fruity lipgloss. Unfortunately, the Marvel store’s only girl superhero offering is a costume called Spider-Girl Sassy Deluxe. In the Marvel world, deluxe means shiny. I’m not quite sure how a halter-top helps you fight crime.

Granted, there aren’t many major Marvel female superheroines to choose from, but there are female members of both the Fantastic Four and X-Men. Where are those role model costume offerings?

This round might have to go to DC Comics. After all, Wonder Woman, Batwoman, and Batgirl are all running for D.C. mayor.