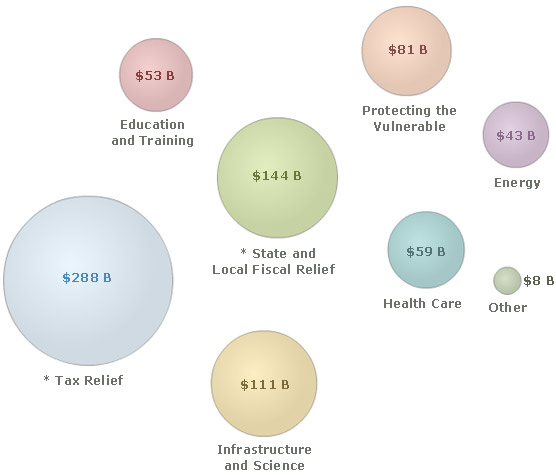 It’s been five months since the American Recovery and Reinvestment Act (ARRA) of 2009, which delivered the largest increase in basic research funding in American history—$21.5 billion.

So what’s happening with the science money?

And that’s not all. The Department of Energy is establishing 16 Energy Frontier Research Centers on university campuses to accelerate development of new energy technologies. Each center will support a full staff of researchers, technicians, and grad students and postdocs.

The National Institute of Standards and Technology is using ARRA funds to support the construction of major new academic research facilities in Alabama, Florida, North Carolina and Texas.

Here’s a small sample of projects funded by state:

Alabama: $1.45 million in NSF awards to two U of Alabama professors in grants to further their research in the fields of chemistry and biological sciences

California: 50 ARRA-funded research grants to the U of California Los Angeles totaling about $20 million for the purchase of a supercomputer and for the math department to jumpstart grad students into research

Colorado: $10.44 million to the U of Colorado Boulder to conduct studies ranging from the diagnosis of learning disabilities and climate change in the tropics to minimizing pain

Georgia: $3.7 million to the U of Georgia for the purchase of lab instruments and for research projects including studying the immune response, AIDS vaccines, and developing materials for renewable energy

Hawaii: $5.5 million to the Hawaii Natural Energy Institute at the U of Hawaii-Manoa for a Smart Grid demonstration project

Louisiana: $1.3 million to an associate professor at Louisiana State U (Health Sciences Center New Orleans’ School of Medicine) to develop new immunotherapies, including a vaccine, for cancer

Maryland: $21 million to the Johns Hopkins U (which receives more federal R&D money than all other universities), to hire more researchers

New Hampshire: more than $3 million to the U of New Hampshire for research into, among other things, climate change impacts and predictions

New York: the State University of New York received dozens of grants supporting summer lab experiences for educators and students and for research in biomedicine, public health, and energy

Pennsylvania: $30 million to the U of Pennsylvania funding more than 100 studies in gene therapy, robotics, public education, neurological disorders, and tobacco’s effect on health

Virginia: $199,951 to the U of Virginia to study (what else?) the impact of stimulus funding on employment in science and engineering fields

West Virginia: $3 million to West Virginia U to study the biological effects of exposure to nanoparticles of tungsten carbide-cobalt

Wisconsin: $35 million to universities in Wisconsin, including to UW-Madison and work on breast cancer risks