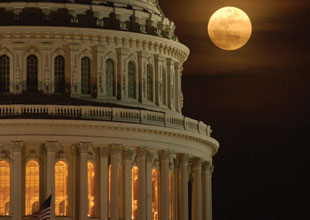 Kevin is skeptical that we need to worry about the market in carbon derivatives that will be created by cap and trade, observing that most of these instruments will be relatively simple contracts like futures, and that “Waxman-Markey has some pretty good language regulating them in any case.”

Well, Waxman-Markey had some good language regulating carbon and other energy derivatives. Most of it was authored by Rep. Bart Stupak of Michigan, who wanted to eliminate over the counter (OTC), or unregulated, derivatives altogether and force trading onto exchanges. His measure also called for stricter trading limits and reporting requirements so that no single operator could assume more risk than it could handle or capture so much of the market that it distorted prices.

However, in the 300 pages of amendments added to Waxman-Markey just after 3.a.m on the night the bill passed, a few new sentences materialized that placed a big asterisk on those safeguards. The final text now says that the sections of the bill regulating carbon derivatives will be overridden by any derivatives legislation that the House passes later in the year.

This wouldn’t necessarily be a bad thing, if the House enacts tough reforms. But that’s not what the lawmakers who engineered the change had in mind: on Wednesday they released a proposal for a far more anemic regulatory regime than the one mapped out by Stupak.

A little backstory: The banking industry, especially Goldman Sachs and JPMorgan Chase, wasn’t happy about the language in Waxman-Markey outlawing OTC derivatives and called for it to be removed. Eighteen members of the business-friendly New Democrat Coalition in the House proved receptive to these concerns. They wrote to Waxman and Markey to say they were “concerned about requiring all OTC derivatives and swaps to be centrally cleared and settled.” The writers included nine members of the financial services committee, as well as some of the House’s top recipients of money from the financial industry. Rep. Scott Murphy of New York and Rep. Melissa Bean of Illinois, for instance, are respectively the second and fifth leading beneficiaries of donations from the finance, insurance and real estate sector this election cycle.

The New Dems point person was Rep. Michael McMahon of Staten Island, who often describes himself as representing one of the largest concentrations of financial services employees in the country. In the wake of the economic crisis, most lawmakers have refrained from conspicuously defending big banks. But McMahon has popped up on Fox News and other venues energetically attacking efforts to “over-regulate” derivatives. “I believe that the derivatives provision [in Waxman-Markey] is still an over-reaction to the AIG mess,” he said in a statement. “The fact remains, however, that when a car accident happens, we don’t ban automobiles.”

McMahon, Bean and other New Democrats released their proposal for derivatives reform on Wednesday. And while introducing their bill on a conference call, Bean and McMahon barely mentioned the damage that derivatives-trading-gone-wild has inflicted on the economy. Instead, McMahon explained that he had been worried by the “mob mentality directed towards Wall Street” and thought that derivatives had been “misunderstood” in the aftermath of the financial meltdown. Their bill would provide regulators with more information about derivatives than they have now, and it would establish an office in the Treasury for oversight of those instruments. But—similar to the proposal advanced by the Obama administration earlier in the year—it only requires standardized derivatives to be cleared, not exchange-traded, and calls for OTC derivatives to be reported to a trade repository, which is far less transparent than an exchange. Their provisions intended to prevent harmful speculation and market manipulation are also less explicit than those offered by Stupak.

All of this is to say that regulation of carbon markets will probably be swept up in broader financial reforms that are the subject of intense lobbying and political pressure. It’s too soon to take for granted that cap and trade will contain rules that go far enough to prevent speculation and fraud.

One promising development is a bill that Sens. Dianne Feinstein (D-Calif.) and Olympia Snowe (R-Me.) introduced to the Senate in early July. Their 56-page legislation is even more detailed than Stupak’s amendment. It creates a central oversight office within the CFTC for carbon trading and establishes extensive electronic reporting requirements so that the CFTC can monitor trading in real time. While it allows for some OTC derivatives, it defines them narrowly: the deals must be of minimal value and traded at a low volume to qualify. Tyson Slocum, director of Public Citizen’s energy program, described it to me as a “very good piece of legislation.” Andy Stevenson, finance adviser to the National Resources Defense Council, characterized it as the “gold standard” for derivatives reform.

Now all Feinstein and Snowe need to do is get it through Congress intact.