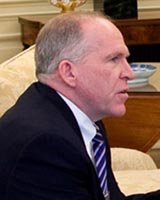 John Brennan, President Obama’s senior advisor for Homeland Security and Counterterrorism, gave a speech Thursday morning outlining the President’s strategy for decreasing the threat of  global terrorism. Some consider Brennan an odd choice to deliver this message because of his ties to the Bush administration and his reported opposition to declassifying the Bush torture memos. But love him or hate him, he’s Obama’s man, and he was there to defend Obama’s policies. And defend them he did.

Brennan stressed the importance of restoring America’s moral reputation. A key strength of the President’s anti-terrorism strategy, he said, is that it no longer undermines national security by turning the American forces into monsters with the use of so-called enhanced interrogation techniques. Such actions, he said, “were not in keeping with our values as Americans, and these practices have been rightly terminated.” Brennan’s repudiation of these techniques is especially interesting because he was Obama’s first choice for CIA chief, but withdrew his name after critics said he was too soft on torture, which paved the way for the eventual choice Leon Panetta.

Dick Cheney and others who claim Obama’s policies are putting the country at risk came in for heavy criticism from Brennan. Such claims show nothing more than “inflammatory rhetoric, hyperbole, and intellectual narrowness” and fail to understand that Obama’s “views are nuanced, not simplistic; practical, not ideological,” he said.

Brennan argued that al Qaeda’s weakened economic and political position in the Middle East and throughout the world is evidence that the administration’s strategy is working. Al Qaeda, said Brennan, “is being forced to work harder and harder to raise money, to move its operatives around the world, and to plan attacks.” But he also emphasized that our overall strategy has been far from perfect, and the United States must increase pressure on terrorists to ensure that they never obtain nuclear weapons. The administration has a five-point plan to continue its fight against Al Qaeda:

1. The United States will begin to define the war based not on our military might or political capital, but by the “common aspirations we share with the world.”

This has been a cornerstone of Obama’s foreign policy strategy since he took office. Obama drew fire, for example, for giving a speech in Cairo in which he promised that the United States was a friend to Muslims. Brennan brushed off the criticism that Obama did not use words like “terror” or “terrorism” in the speech, saying that using the speech to villify Muslims would have played right in to al Qaeda’s goals, which are “to foment a clash of civilizations in which the United States and Islam are seen as distinct identities that are in conflict.”

2. President Obama does not refer to the conflict as a “war on terrorism” because “you can never fully defeat a tactic like terrorism any more than you can defeat the tactic of war itself.”

Describing the conflict as a global war, Brennan said, is problematic because it “plays into the misleading and dangerous notion that the U.S. is somehow in conflict with the rest of the world. It risks setting our nation apart from the world, rather than emphasizing the interests we share.” Brennan also rejected the “jihadist” moniker often given to Muslim terrorists because it gives them a false religious identity that they don’t deserve.

3. We need to understand more clearly the conditions that make violent extremism appealing to some.

Because the US government does not adequately understand the plight of impoverished Muslim communities, Brennan said, it is unable to adequately care for innocents who are not anti-American but simply misinformed into believing that the US “actually wants to keep people impoverished and unempowered.” Brennan also stressed the need for the US military to strengthen its linguistic and cultural skills to have a better understanding of Middle Eastern societies. (This goal has run up against President Clinton’s “Don’t Ask Don’t Tell” policy, which only allows closeted gays to serve—sixty Arabic speakers have been expelled from the military for disclosing their sexuality since the policy was first implemented.)

4. Brennan notes that the new strategy will incorporate a “political, economic, and social campaign to meet the basic needs and legitimate grievances of ordinary people.”

To win the allegiance of non-violent people, terrorist groups often provide financial and social services to make people believe that they are being protected from the American military. Brennan said that the US can transcend this characterization by “exposing al Qaeda as nothing but the death cult that it is and isolating extremists from the people they pretend to serve.” According to Brennan, the “barbarism, brutality, and beheadings” widely used by terrorists have already “provided backlashes among ordinary people, from Afghanistan under the Taliban to al Qaeda in Iraq and increasingly in Pakistan today,” he said.

5. Finally, the US must use all tools at its disposal to make a lasting change.

As with the economy, the Obama administration can’t blame national security issues on the Bush administration for much longer. The strategies that Brennan outlined in his speech today indicate the administration’s first step toward owning the perception of the US abroad.