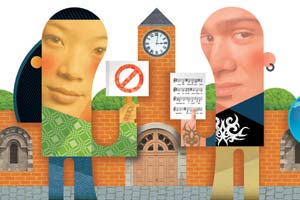 $39,000 a year. That’s the going rate for tuition at hot liberal arts colleges like Williams and Amherst, which came in first and second respectively in U.S. News & World Report‘s best liberal arts colleges rankings. The 10 schools on our list may not bother to juke their stats to make U.S. News‘ short lists, but they still have plenty to offer—and for a lot less dough. Know of a college that’s both cool and cost-efficient? Nominate it here for the 2010 MoJo Mini College Guide.

Berea College (Kentucky)
Best value for: Low-impact men (and women) on campus
Tuition: $0
All 1,549 students get free tuition for four years. Some live in the Ecovillage, environmentally friendly housing that features a “permaculture food forest” and a contraption that makes sewage so clean you can swim in it.

New College of Florida (Sarasota)
Best value for: Brainy beach bums
Tuition: $26,300/$4,700 in state
The Sarah Lawrence of the South favors tutorials and evaluations over giant lectures and letter grades. In the past 14 years, it’s cranked out more Fulbright Scholars per student than Harvard, Stanford, or Yale. 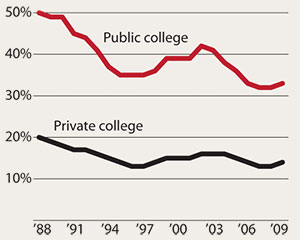 Sources: The College Board; Department of Education

Hope College (Holland, Michigan)
Best value for: Artists with a spiritual side
Tuition: $25,500
This creative Christian college is known for its dance, theater, art, music, and visiting writers programs. Indie rocker Sufjan Stevens is an alum.

The University of Minnesota-Morris
Best value for: Alt-energy enthusiasts
Tuition: $8,830
This public liberal arts college has academic chops and green-energy cred: By 2010, it expects to go carbon neutral with help from an onsite wind turbine, which already produces 60 percent of the power on campus.

Kettering University (Flint, Michigan)
Best value for: Post-GM auto geeks
Tuition: $27,584 (first year)
This top engineering school offers a four-year professional co-op where students alternate semesters in class and on the job—earning as much as $26 an hour. Plus, you can minor in Fuel Cells and Hybrid Technology.

The College of New Jersey (Ewing)
Best value for: Community-service junkies
Tuition: $16,825/$8,718 in state
Students at this small public college can make a four-year commitment to participate in service projects in return for a scholarship that covers up to full tuition. And they swear that the annual LollaNoBooza bash isn’t totally lame.