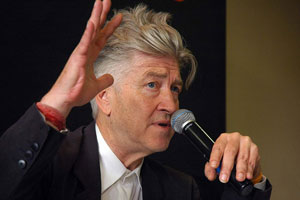 When Pitchfork announced in June that David Lynch had a forthcoming rock album, I was skeptical. Great, another celebrity vanity project. Anybody else remember that awkward interview with Billy Bob Thorton’s rock band where he tried to claim he actually wasn’t an actor at all? Or Balthazar Getty’s little band? And then there was Scarlett Johansson‘s Anywhere I Lay My Head, featuring really bad Tom Waits covers. Add to this the fact that Lynch is famous for fascinating but somewhat inaccessible ideas. (Remember the magician kid in Twin Peaks?) All told, it looked like we had a recipe for trouble.

Which is why I’m surprised to say that the result is actually, well, pretty good. Lynch doesn’t sing on Fox Bat Strategy: A Tribute To Dave Jaurequi, but he did write the lyrics, apparently. To call this a tribute to his group’s singer/guitarist is slightly misleading since these songs were actually recorded back in 1994—and Jaurequi died in 2006. The album features seven songs by artists involved in the soundtrack for Lynch’s cult TV series Twin Peaks; bassist Don Falzone, drummer Stephen Hodges, and engineer Bruce Robb have all been involved with Lynch and his projects.

The 63-year-old producer/director, who has been nominated for three Oscars for best director, is most famous for his many off-kilter films, ranging from 1977’s Eraserhead to Blue Velvet, Mulholland Dr., and Inland Empire. He has also written a comic strip and directed a Gucci commercial. While there have been rumors of other Lynch musical projects, Fox Bat Strategy is the first rock ‘n’ roll record with his stamp.

While the album clocks in at a paltry 38 minutes, it has some very long songs, including “I Dream Of You,” the final track, which lasts nearly nine minutes. “This is what I call ‘modern ’50s’ music,” Lynch told Entertainment Weekly.

I’m not quite sure what he meant by that, but Lynch fans will find this music pretty familiar. It features slow, ambient, psychedelic new blues with plucky guitar work and lots of reverb. (Think Chris Isaak—another Lynch associate—on a particularly lazy day).

Fox Bat Strategy isn’t likely to be a party hit or something future music writers will reflect on, but it is an interesting series of songs, and the sort of thing you might want to listen to in a contemplative or poignant moment.