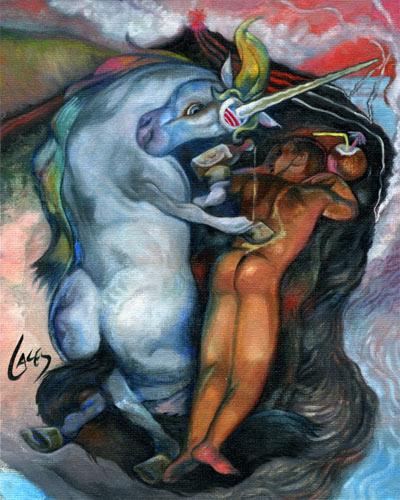 Some web weirdness/wonderfulness to perk up your Monday. Check out these paintings of an unabashedly nude Obama riding a unicorn, getting a massage from said unicorn (left), and confronting a fetal-looking Rush Limbaugh. Along Obama’s naked travels, he meets a glum-looking Dr. House, Stalin, and Sarah Palin.

Dusting off my art history major, I would say that some of artist Dan Lacey‘s artistic inspirations are Frida Kahlo, Diego Rivera, and early 20th century Russian Art with a dash of Chagal. Though given the high unicorn density, I’m sure Lacey has many other, ahem, non-traditional influences. Enjoy!