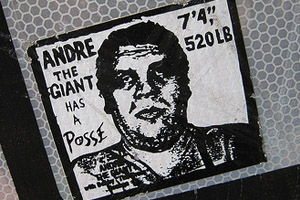 Photo by Flickr user <a href="http://en.wikipedia.org/wiki/File:AndreTheGiantSticker.gif">David Boyle in DC</a> used under a CC license

Yesterday, I wrote about pop-propagandist Shepard Fairey’s decision to put a graffiti-resistant coating on his LA studio’s brick walls. This morning I received a friendly email from him saying he thought I’d been unfair in questioning the move. That was a accompanied by a far less friendly message that he says he sent to Eastsider LA, the site that originally reported on this:

Your post about the sealer on our building was very obnoxious. Do you just not give a shit about objectivity? My practice as a street artist has NEVER included putting my work on pristine or operational buildings unless asked to do so. I’m not mad at the graff artists who have hit our building, I just like the brick  unadorned. I’ve always been a champion of street art and graffiti in the same way I’m a champion of free speech. I think it is important for people to be able to speak freely, but if I’m watching a channel whose content is not my cup of tea I may choose to change the channel. It does not make me an opponent of free speech. Preferring my brick unadorned does not make me anti-graffiti. Every time I put a piece of art on the street I know it may be cleaned. That is the nature of the art form. Our building houses a fucking gallery and we show street artist’s work there and on banners on the side of the building. For you to portray me as anti-street art is very revealing about YOU and YOUR agenda. Are you pro-street art or graffiti? If the answer is yes, then I’d assume based on your portrayal of me, that you’d welcome graffiti on your house or business lest you be revealed to be an anti-art hypocrite. If you have any integrity you will post my response along with your home and office address as an invitation for people to display their art there. Your attempt to portray me as hypocrite was thinly veiled incitement for people to tag our building. I have been arrested 15 times and know the risks of street art. Do you know the risks of being an irresponsible journalist? I responded to your inquiry very politely and you disrespected my candor by taking a cheap shot… writing something irresponsible and sensational to get people to your site. You could have written something more sophisticated and balanced that could have created a worthwhile discussion about public art. Instead you were lazy and obnoxious. Maybe the economy has made you desperate, or maybe you are always slime. Either way, you should be ashamed.
-Shepard

Jesus, indeed! Worthwhile discussion of public art aside, this is way off the mark. If you read the original Eastsider post, you’ll see that the only openly critical part is its headline: “This is one wall Shepard Fairey wants to keep free of self-expression.” The rest is pretty straightforward reporting. It was the commenters who accused Fairey of hypocrisy and suggested that his studio might now be an even bigger target for spraypainters. C’mon, Shepard—you know how to tell the difference between mild-mannered bloggers and their less restrained commenters. Just as you no doubt appreciate the difference between, say, a street artist who says he never messes with other people’s property without permission and the anonymous fans who plastered gazillions of his Andre the Giant Has a Posse stickers around the world.