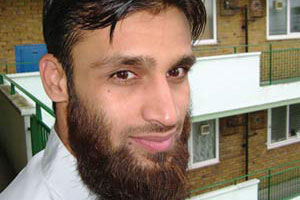 The last person to see Syed Mehmood Hashmi as a free man was his friend Mohammed Haroon Saleem, who on June 6, 2006, drove Hashmi to London’s Heathrow Airport, walked him to the security checkpoint, and watched him hoist his bag and head for the gate. But Hashmi never made his flight. At passport control, constables pulled him from the line and told him they had an extradition warrant on behalf of the US government. He was to be charged with aiding Al Qaeda.

Today Hashmi, who is 29, sits in a windowless cell, in solitary confinement. He is not allowed to watch television or listen to the radio or read a newspaper unless it is at least 30 days old and censored. He is not allowed to speak to guards, other inmates, or the media, or to write anyone but his attorney and his family (once a week on three single-sided pages). The only people cleared to visit, besides his lawyer, are his mother and father, but he couldn’t see them for three months after he was caught shadowboxing in his cell—an infraction that cost him visiting privileges. Hashmi’s lawyer, Sean Maher, says the isolation is slowly driving his client mad.

Hashmi is not in Guantanamo Bay, nor is he an enemy combatant. He’s a US citizen, born in Pakistan and raised in Flushing, Queens, facing trial in federal court in Manhattan. His home for the past two years has been the Special Housing Unit at the Metropolitan Correctional Center, a stone’s throw from the Brooklyn Bridge. Hashmi might be guilty, he might not. We may never know—because when he goes before judge and jury later this year he won’t get a fair trial. Much of the government’s evidence against him is secret, and he can’t see it because he doesn’t have a security clearance. Maher, who does have a security clearance, can’t see much of it either. Maher finds this incredible.

“There are cases across the country where men are being convicted and given astronomical sentences under the most inhumane and draconian conditions possible,” says Maher. “Animals at the Bronx Zoo get treated better than this.”

As one of his first official acts, President Obama issued an order to shutter Guantanamo and review all US terrorism detention policies. But no change is on the horizon for the dozens of terror cases cycling through the federal court system—some of which, thanks to a range of post-9/11 measures, have come to resemble the kind of jurisprudence practiced at Guantanamo.

Defendants who have never been tried or convicted of anything are locked in solitary confinement, sometimes for years. Evidence is routinely kept secret from the defense. Attorneys are forbidden to reveal classified information even if it’s already in the public domain. (Among the materials deemed too hot for public consumption in Hashmi’s case is a college term paper titled “How Did 9/11 Change the World?”) In some cases, the prosecutors are not permitted to view the most sensitive classified evidence in their own cases—instead, intelligence agencies present this critical information to the judge alone. Many of these cases involve US citizens or legal residents; in many instances, they are setting precedents that degrade legal standards across the system.

This, according to the government, is how Hashmi ended up behind bars: In 2004, while in graduate school in London, he allowed an acquaintance from Queens named Mohammed Junaid Babar to crash at his apartment for two weeks. Babar stashed his luggage at Hashmi’s place—luggage that, the government says, contained “military gear” for Al Qaeda. (Babar eventually pled guilty to handing the gear—a bunch of raincoats and waterproof socks—off to Al Qaeda’s No. 3 man.) The government says Hashmi knew the contents of the luggage and their destination, so he knowingly aided someone who was aiding terrorists. Babar is now the government’s star witness against Hashmi, a role he has played in other cases in an effort to whittle down his own sentence; he may ultimately get off with time served. Meanwhile Hashmi, who is not accused of any direct connection to Al Qaeda, faces 70 years in prison.

There’s no argument against reasonable measures to secure possibly dangerous terrorists. But in cases like Hashmi’s, secrecy is often applied with little vetting from judges, who defer to the government’s claims of national security. Maher says this can mean something as basic as not being allowed to show his client a photograph to see if he can identify the people in it. “How can you defend someone like this?” he asks.

Prosecutors have also had wide latitude to use secret witnesses, as well as information of questionable origin. A 2005 case involving Ahmed Omar Abu Ali, a US citizen, hinged on a coerced confession obtained by Saudi authorities. During the trial, which Amnesty International declared unfair, prosecutors used a controversial tactic called the “silent witness” rule to show some evidence to jurors but not defense attorneys.

All the secrecy might make sense if it involved truly sensitive information. But when such evidence has been exposed, it’s often proved to be flawed or irrelevant. In one 2007 case, a prosecutor told me, a piece of the government’s classified evidence turned out to be a newspaper clipping. And in the 2006 trial of two Albany men charged in a plot to traffic a Stinger missile, a crucial piece of the government’s evidence turned out to be a mistranslation of the word “mister” or “brother,” wrongly interpreted as “commander.” After the mistake was revealed in open court, the Justice Department locked down all its evidence and demanded that defense attorneys review materials with a DOJ monitor present at all times.

Obama’s detention-review commission is due to make its recommendations this summer; one much debated option is a new national security court, staffed by specially cleared judges and juries, with lower due-process standards and far-reaching secrecy measures. The idea was first articulated in a 2006 white paper by Andrew C. McCarthy, the government’s lead attorney in the trial of Sheikh Omar Abdel Rahman, the cleric who conspired to blow up various New York landmarks. McCarthy argued that the federal courts are unfit to try terrorism cases and that the presumption of innocence should not take precedence in matters of national security. Sensitive information cannot be shown to the defense, he wrote, because “to disseminate it, especially in wartime, is to educate the enemy.”

McCarthy’s ominous language belies the fact that most of the people tried on terrorism charges since 9/11 have only been charged with “material support,” which can mean helping terrorists or merely thinking about doing so someday. The notion that we should retrofit the federal courts with a special star chamber for such cases is fraught with constitutional peril. As Judge Leonie Brinkema of the Eastern District of Virginia, who has presided over some of the most high-profile terrorism trials since 9/11, has put it, classification should be used only in cases of genuine national security concern—not to hide information that is merely “embarrassing and…ugly.”

This story was supported by the Investigative Fund at the Nation Institute.