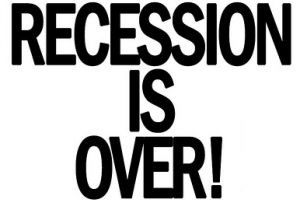 Used under a Creative Commons license from Flickr user Ventolin

Most people seem to think we’ve hit rock bottom, but signs of recovery are slamming me every day from all angles of media, pop culture, and word of mouth. Let’s go David Letterman style with a list, starting at the bottom and working our way up.

Top 10 Signs That the Recession Really Is Over

10. Daniel Gross wrote a column titled “The Recession Is Over! (Technically.)” on Slate.

9. The housing market is making a comeback.

8. ‘Cause Bloomberg said so.

6. Goldman bankers have already returned to their lavish lifestyles.

5. I’m not getting friend requests on LinkedIn about 700 times a day from people I know who are hopelessly out of work. (I hate, hate, hate that useless site! No, I will not be your “LinkedIn” friend!)

4. This week’s New York Times Magazine cover story had nothing to do with economics!

3. Being unemployed is no longer chic. And that “Now I have time to find myself” BS has become terribly cliche.

2. TIME overzealously ran a story 5 months ago called “Six Signs The Recession Is Ending,” meaning they couldn’t think of 10 signs. And now this list speaks for itself.

1. I was invited to a party celebrating the ultimate in douchebaggery: PocketChangeNYC’s Fashion Meets Finance soirees are back on. The objective of these gatherings: To mate the men of finance with the women of fashion. Hand me my barfbag, now! Maybe I don’t want the recession to end so soon after all…