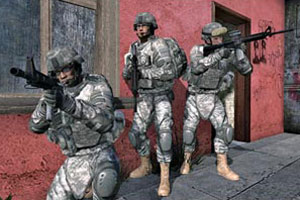 1 in 4: Proportion of males between 13 and 24 who have played America’s Army, the 7-year-old shooter game that launched its 3rd version in June. The free download has 10 million registered users; players are 29% more likely to be interested in military service.

14,500 square feet: Size of the Army Experience Center, an arcade with banks of shooter games, Black Hawk and Humvee simulators, and free wifi that opened in a Philadelphia mall in August 2008. Staffed by 20 Army recruiters, some in civvies, it’s open to visitors of all ages.

$1.3 million: Amount the Army spent to sponsor the hit Xbox game Halo 3. At a launch event at a New Hampshire gaming store, an Air Force recruiter explained, “Our target market is identical to that of video game stores.”

5 miles: Amount of data cable inside the Virtual Army Experience, a “virtual test drive of the United States Army” that tours fairs and festivals around the country. Visitors can participate in a simulated attack on a “genocidal faction in the notional city of Nradreg,” all under a giant inflatable dome.

145,000: Questions per month answered by Sgt. Star, GoArmy.com’s virtual tour guide. Asked about his taste in music, the camo-clad avatar replies, “I like everything from the classics to hip-hop to the occasional show tune.”