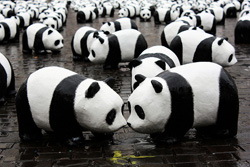 BBC wildlife expert Chris Packham has said it’s time to “pull the plug” on pandas. Packham, who hosts a BBC program on wildlife, says the giant panda has “gone down an evolutionary cul-de-sac. It’s not a strong species.” Packham went on to explain that pandas receive far too much conservation funding because they’re cute and cuddly, and that captive breeding programs are useless because there isn’t enough wild habitat to sustain them.

I’ll agree with Packham that there likely isn’t enough habitat to sustain giant pandas, partly because that habitat is shrinking all the time due to China’s recent economic ramp-up. But China isn’t just thinking of conservation when it breeds pandas: Nearly 200 pandas have been rented out to zoos around the world at $1 million a year… each. And if those pandas have cubs abroad, those cubs also belong to China and must be paid for ($600,000 each).

Additionally, as this Economist piece points out, pandas are an important diplomatic tool. As Communist China rebrands itself as a modern, industrialized nation, pandas are a “national symbol, a powerful instrument of foreign policy, and a potent brand.” Pandas also bring  tourism to Chinese provinces, and the big bears are logos for many Chinese companies, including the Panda cigarette brand that was so popular and hard-to-find it created a black market.

With so much invested in the panda, and with the panda’s incredible popularity, it’s not surprising that it gets a lion’s share of conservation funding. Pandas need more help than other species because they’re terrible at having sex (researchers even tried giving them Viagra) and their specialized habitat makes them less likely to survive global warming than generalist species like coyotes. But even if there isn’t enough habitat to support additional giant pandas, that’s not enough reason to “let them go” extinct in the wild. Pandas live in wildlife sanctuaries, and if the pandas go, so would their habitat, leaving the hundreds of species that co-exist with them suddenly unprotected. Yes, it is vaguely annoying that pandas get so much attention while frogs and worms and other equally important animals go unheralded. But let the giant panda go extinct? Not while China has anything to do with it.