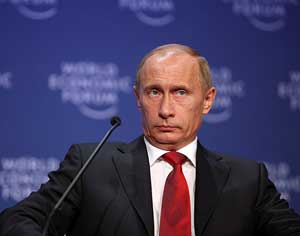 Photo from the <a href="http://www.flickr.com/photos/worldeconomicforum/">World Economic Forum</a>.

Last week, a shocking GQ investigative report, “None Dare Call it Conspiracy,” hit the newsstands. Not that most people would know about it. Oddly, the magazine’s parent company, Conde Nast, seems bent on squelching the explosive article.

The report links Russia’s intelligence service to a series of bombings in 1999—blamed on Chechen terrorists—that killed over 300 Russian citizens, led to the Second Chechen War, and propelled Vladimir Putin to the presidency. At the center of the story is a Mikhail Trepashkin, a former KGB-turned-FSB agent, whose detailed allegations draw into question Putin’s role in the bombings. Similar inquiries have led to the mysterious deaths of both journalist Anna Politkovskaya and Trepashkin’s former colleague Alexander Litvinenko.

Perhaps fearing that the story would impact the advertising revenues of the four titles Conde Nast publishes in the Russian market, the media company has attempted to bury the piece. In an internal email on July 23, obtained by NPR’s David Folkenflik, one of the media company’s top lawyers informed GQ editors that “Conde Nast management has decided that the September issue of US GQ magazine containing Scott Anderson’s article…should not be distributed in Russia.” The report was not teased on the magazine’s cover and, as of now, is not available on the magazine’s website. Gawker has attempted to rectify the situation by posting a scanned copy of the article on its website and asking readers to help them translate the article into Russian.

While Conde Nast has thus far been silent on the NPR report (they did not respond to my request for comment), this appears to be a clear-cut case of commercial interests trumping journalistic integrity. As Scott Anderson, the author of the piece said to Folkenflik

I think it’s really kind of sad. Here now is finally an outlet for this story to be told, and you do everything possible to throw a tarp over it.

By attempting to stifle the report, Conde Nast may end up succeeding in bringing more attention to the piece. That, and inadvertently making one of the strongest arguments yet for supporting independent nonprofit media like NPR (and Mother Jones).