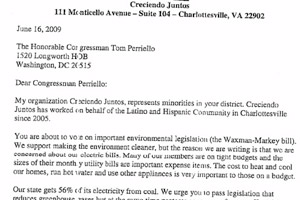 Two weeks before the House voted on the historic Waxman-Markey climate bill, a number of key Democrats received letters purportedly from minority groups, urging them to oppose the legislation. The now infamous letters turned out to be forgeries generated by Bonner and Associates, a political consulting firm working on behalf of the coal industry. The story of exactly how the letters found their way to Congress has remained murky, and Bonner has repeatedly blamed the incident on a renegade temp. But documents released today by a congressional investigation and viewed by Mother Jones lift the lid on Bonner’s inner workings—offering fresh evidence that deceptive tactics weren’t an anomaly for the firm, but were built into its standard operating procedure.

The documents show that Bonner was officially hired on June 10 by the Hawthorn Group, a communications firm which had in turn been enlisted by the American Coalition for Clean Coal Electricity (ACCCE), a coal industry lobby. The contract was verbal, according to material Bonner provided to the House Select Committee for Energy Independence and Global Warming. Nothing was committed to paper.

In an email to Bonner headed “Ready to Rumble,” Hawthorn lists seven key Democratic targets it believed could be pressured to vote against the bill. Hawthorn also named specific interest groups it hoped would write letters opposing the legislation—especially organizations “representing the interests of veterans, senior citizens, minorities, and other groups,” according to the documents. The email requests Bonner to produce five letters from such groups in the district of each targeted lawmaker.

I am working with seniors to stop an increase in their utility bills. Do you know any senior [sic] that are struggling to get by on Social Security? {wait for response} What would happen if their utility bill doubled? Would they not run the air-conditioner in the summer or not have heat in the winter? What else might they cut out of their budget to have electricity … food … medicine? I have a letter that other senior groups have wrote would you write a similar one (OR) would you sign a similar letter?

Bonner’s basic modus operandi encouraged other dubious practices. The company relies on a small permanent staff—only seven employees at the time the phony letters were sent—to oversee dozens of temps. Five temporary workers were hired to work on the Hawthorn/ACCCE contract and were offered financial incentives to generate as many letters as possible from their assigned district in the two weeks before the climate vote, according to the documents—$100 for the first two and $50 for any additional letters.

Temps were given a predrafted “sample generic letter,” even before any of the supposed authors had been contacted, according to Bonner’s submission to the committee. Bonner also admits that it pulled logos for the citizens’ groups off their websites for use in the draft letters. Bonner employees were supposed to provide the letters to potential signatories for “review, approval, signature.”

Bonner’s attorney has contended in letters that the temporary employee who sent the forged letters took the job “with the pre-determined intent of engaging in fraudulent activity.” But this unnamed temporary staffer hardly appears to have been extensively vetted or trained. After being interviewed, he was put to work almost immediately. The first forged letter was sent on his first day on the job. He worked for just seven and a half days, producing 13 fake letters and amassing $350 in bonus payments, according to Bonner. Bonner says the staffer was fired immediately after the forgeries came to light, and also says it referred the matter to law enforcement.

Yet even if Bonner was infiltrated by a rogue temp, a full-time staffer was still supposed to verify each communication, according to both the company’s responses to the congressional investigation and interviews that Mother Jones has conducted with former staffers. If Bonner’s account of their operating practices is to be accepted, this appears to be where their system failed. Bonner representatives informed the committee that the full-time employee on the Hawthorn/ACCCE account “faced an unanticipated dire medical diagnosis that necessitated her taking an emergency leave of absence.” Although she was replaced by a substitute staffer, Bonner’s attorney writes, “some letters were transmitted to Capitol Hill before they could be thoroughly reviewed.”

In the end, Bonner generated 58 known letters to representatives in the run-up to the vote on Waxman-Markey. Thirteen were confirmed forgeries, recieved by three lawmakers. One, Rep. Tom Perriello of Virginia, voted for the bill. But the other two lawmakers, Reps. Kathy Dahlkemper and Chris Carney of Pennsylvania, opposed it. So did other lawmakers on Hawthorn’s list of Democratic targets, including Rep. Glenn Nye of Virginia, Rep. Dan Boren of Oklahoma, and Rep. Jason Altmire of Pennsylvania.

As Mother Jones noted last night, ACCCE, Hawthorn, and Bonner all knew about the forgeries at least 48 hours before the House voted on the climate legislation. Bonner says it discovered the fraudulent letters on June 22 and 23 but didn’t notify Hawthorn until June 24, which in turn alerted ACCCE that evening. ACCCE CEO Steve Miller said in a letter to congressional investigators that his organization “demanded that Hawthorn require Bonner to promptly reach out” to both the lawmakers who received the letters and the local organizations who were victims of the forgery. Hawthorn assured ACCCE that Bonner would do so.

But Bonner apparently made no attempt to contact the three recipients of the phony letters until July 1. In fact, Bonner did not actually talk to any staffers of the affected members until July 13, and Rep. Carney was never informed directly “due to a miscommunication,” according to Bonner’s attorney.

There are still many more unanswered questions about the Bonner affair. There’s the matter of the genuine letters generated by the company—did the groups or individuals that sent them know exactly what they were signing on to? And Bonner’s letters were just one part of a sweeping offensive against the climate bill orchestrated by Hawthorn on behalf of ACCCE. The documents released at today’s hearing reveal that ACCCE has paid Hawthorn nearly $3 million so far this year for outreach to community groups, with a specific focus on minorities, seniors, and veterans. (Bonner filed an invoice for $43,500 for its climate work for Hawthorn, but wasn’t paid after the forgeries came to light.) In addition to Bonner, Hawthorn also subcontracted with two other firms—Lincoln Strategies and another called Executive Communication, which did “grassroots” outreach spanning 72 congressional districts in 30 states. Which community groups lent their names to such efforts—knowingly or otherwise—remains to be revealed.