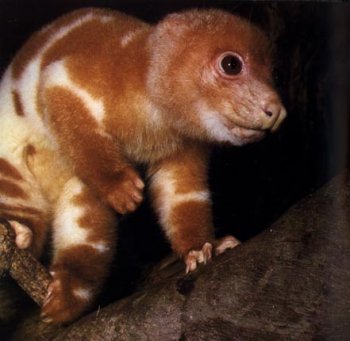 The cuscus is a marsupial native to Australia and New Guinea. This nocturnal tree-dweller has opposable toes and fingers like a monkey which help it keep hold of slippery branches. It can also use its long, prehensile tail to keep its balance. The cuscus is actually a member of the opossum family and ranges in length from about one to two feet (with the tail an additional two feet long) and weighing in around 10 lbs. The bottom of their tales are furless, rough and scaly so as to have a better grip. Cuscuses generally eat fruits and leaves, but will snack on eggs and small mammals if it can get them. Though, since the cuscus’s low metabolism and body temperature, they’re slow like a sloth and rarely catch other animals. The cuscus’s main predators are pythons and birds of prey; because cuscuses are largely arboreal, ground-dwelling predators are generally not a problem. Other than man, of course, which sometimes hunts and eats them.

There are a few different kinds of cuscuses. The spotted (pictured above) and gray varieties are not endangered, but the large, splashy-coated black-spotted cuscus is battling poachers for survival. It lives mostly in New Guinean rainforests and is suffering devastating habitat loss from logging and agriculture; it’s also been hunted extensively both for its meat and distinctive, woolly coat. It’s now considered “critically endangered” and due to its remote habitat, it’s not even certain how many of the animals still exist today. Only 18 specimens have ever been collected. As one book said, its “outlook” seems increasingly “bleak.”