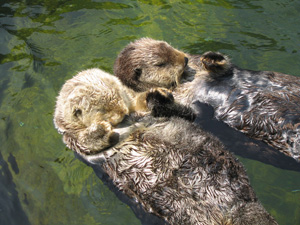 Sea otters may be in the weasel family, but there’s nothing sly or slinking about them. Sea otters are actually favorites at zoos and aquariums because of their active, playful nature, and natural cuteness. Sea otters can often be found floating on their backs, sometimes placing crabs or mussels on their stomach before using a rock to hit them and crack them open. Sometimes, as seen at left, they even “hold hands” as they sleep on their backs to keep from drifting.

While sea otters do well in captivity, they are struggling in the wild. There are about 100,000 sea otters left, living along the Pacific coast from California to southern Alaska. In Alaska, sea otter populations have declined more than 90% since the 1980s due to increased attacks by killer whales, a fact scientists attribute to changing oceanic ecosystems. Sea otters are a keystone species, keeping invasive animals like sea urchins in check; now that the otters are disappearing, sea urchins are destroying kelp forests, which in turn means that fish that like to hide in kelp forests have to find new homes.

Sea otters in California aren’t doing so hot either. They’ve experienced a sudden drop in population, for which causes are uncertain. To combat this, on October 1 California Senator Barbara Boxer introduced a bill to fund research on California sea otters before they can decline further.

Sea otters are important to the California ecosystem, and they’re also very unique animals in general. For example, their fur is extraordinarily silky and dense, 1 million hairs per square inch (humans have only 3,000 per square inch on their heads). Because otters have no blubber, they rely on their fur to protect them from the cold Pacific waters. The long, outer coat of fur is oily and repels water, while the shorter, fuzzier coat underneath traps air bubbles, providing ample insulation. Too bad for the sea otter, they’re not the only ones who like their coat: in the 1700 and 1800s, furriers hunted the sea otter almost into extinction. It’s estimated that at one point, there were only 1,000 of the animals left in the world. The sea otter was able to rebound, thanks to some legal protections, but its current population is still only about 60% of its pre-1700s population.