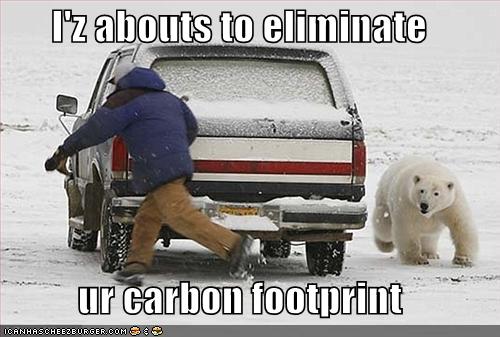 Photo courtesy i can has cheezburger.

Congratulations, polar bears! You’ve just won 200,541 square miles of Alaskan habitat… maybe. After being sued by several environmental groups, the US Fish & Wildlife Service announced today that polar bears may receive what’s thought to be the largest critical habitat ever. Too bad just earlier this week the Minerals Management Service announced that they’d approved Shell to drill in some of those those same 200,541 square miles. So what’s it gonna be? Oil, or bears? Right now, that’s to be determined. Fish & Wildlife will open a 60-day public comment period on the bear habitat proposal, but doesn’t have to make a final decision on whether to actually award the land under the Endangered Species Act until June 30, 2010.

The proposed polar bear habitat, if it gets awarded, is extensive enough to encompass summer and winter sea ice, terrestrial denning areas, and islands. The terrestrial portion is in the Northern part of Alaska, some of it within a 20 mile radius from the US-Canada border, and some of it within a 5 mile radius of Barrow and the Kavik River. The sea ice/water portion extends over the Continental Shelf and includes water up to 300 meters deep. Under the Endangered Species Act, now that the polar bear is finally listed, the government must designate critical habitat.

But that’s not stopping the State of Alaska: this week it filed a supplement to its 2008 lawsuit  contending that the government didn’t really listen to its concerns before listing the polar bear as endangered. In a press conference yesterday, Alaska’s attorney general said the state was doing “a good job in protecting the species,” and that the government’s models predicting further sea ice declines were “flawed.” A representative from the Center for Biological Diversity, quoted by the AP, begged to differ:

“We are really disappointed to see that the state of Alaska is continuing to deny the science of climate change… It is ironic in a state that is feeling the impacts of global warming before everyone else that the state would take this position that can only hurt Alaskans.”