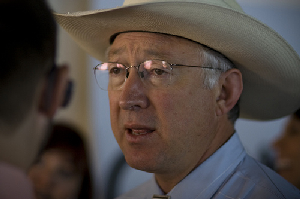 Yesterday the Supreme Court decided not to hear Department of the Interior v. Kerr-McGee Oil and Gas Corp., thus preventing the DOI from collecting $350 million in royalties for deep-water drilling operations in the Gulf of Mexico. Now that the Supreme Court has left the ruling in place, the DOI may miss out on another $19 billion from companies that may claim similar exemption from royalty payment.

The trouble stems from a decision the federal government made in the 1990s to cushion the blow of low fuel prices to oil and gas companies. In 1995 the Outer Continental Shelf Deep Water Royalty Relief Act allowed companies to forgo paying royalties on small operations if the operations did not seem profitable. The DOI charged the Minerals Management Service (MMS) with the task of determining which operations were eligible for the royalty relief.

You remember the MMS, right? That’s the agency whose employees, a 2008 DOI report said,  “frequently consumed alcohol at industry functions, had used cocaine and marijuana, and had sexual relationships with oil and gas company representatives.” (Read more about MMS corruption here and here.) The MMS is also the agency whose Royalty in Kind program was canceled last month for failure to collect government revenues.

Even without the MMS’s history of corruption, the 1995 royalty relief legislation does a pretty good job of giving oil and gas companies free rein. The law applies to all leases signed between 1996 and 2000, and all leases signed under the stipulated circumstances can operate royalty-free forever, despite the fact that in the subsequent 14 years, oil and gas prices have risen, contracts have changed hands, and many operations have become very profitable.

Secretary Salazar remains confident that the DOI will get its due… someday. “We will work with all involved in the days ahead to determine the best way forward,” he said in a DOI press release yesterday. But if the DOI wants to collect on publicly owned resources, it’s not finding any sympathy in courts. Better luck in Congress?

Perhaps. Last month Salazar spoke in favor of legislation proposed by Rep. Nick Rahall (D-West Virginia) that would abolish royalty relief and other industry-favoring regulations. The bill comes at a much needed moment as newer wind and solar industries join the race to develop America’s natural resources.