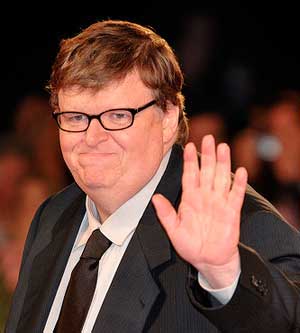 Michael Moore is at it again. In Fahrenheit 9/11, he took on US foreign policy as brought to us by George W. Bush and Dick Cheney. In Sicko, he dissected the health insurance industry. And in his new documentary, Capitalism: A Love Story, he challenges the fundamental organizing principle of American society: private enterprise. The film is a series of set pieces examining varying aspects of the economic crisis at hand: foreclosures and evictions, the hyper-casino-ization of Wall Street, the de-industrialization of America (kick-started under President Reagan), privatized prisons for young adults, CEO excesses, “Dead Peasants” insurance, the TARP bailout, the collapse of GM (his favorite corporation), the influence of Big Finance in Washington, and the pitiful low pay for regional airlines pilots. The film climaxes with never-before-seen footage Moore’s researchers uncovered of FDR telling the American public in 1944 on the radio that the nation needed a second Bill of Rights that would guarantee Americans the right to a job, to a home, to an education, and to medical care. “Unless there is security here at home, there cannot be lasting peace in the world,” Roosevelt says.

Whatever happened to enshrining all those rights? Moore asks. The answer: the wealthy, looking to become more wealthy, blocked this, and took the rest of us for a decades-long ride, during which we paid dearly and they chuckled all the way to the bank—and then chuckled again when our tax dollars were used to bail out their banks. Moore depicts Barack Obama’s election as something of a popular rebellion against the blood-sucking elites, without coming to terms with the fact that Obama fully backed the $700 billion TARP bailout that Moore characterizes as outright theft.

The film is loaded with poignant and provocative moments. Whether it’s a family being forced out of its house or a pilot who has no choice but to apply for food stamps, Moore finds compelling, on-the-ground tales that illustrate the economic abstractions he assails. But with its wide take, this movie is not as effectively laser-focused as Sicko. Its chief premise, though, is blunt and easy to follow: capitalism is bad beyond salvation. Moore even brings in a series of Catholic priests to back him up on this. WWJD? Certainly not bundle sucker-subprime loans into securities backed by credit default swaps in complicated deals that enriched the moneychangers while eventually causing millions to be thrown out of their homes, often by pawn-of-the-system sheriffs doing the bidding of the monied elites. Also unlike Sicko—which essentially was a call for the United States to adopt a health care system like that of Canada, England or France—this film doesn’t end with a compact policy idea. “Capitalism is an evil,” Moore narrates, as the film concludes, “and you cannot regulate an evil. You have to eliminate it.” Perhaps, but then what? Moore doesn’t say.

After a screening in Washington on Tuesday night, Moore told the audience that if people don’t rise up and take action after watching this film, that’s it—he’s done making movies. I can do other things, he remarked. He said this without a smile—which made it seem he wasn’t kidding. But what action? Make citizen’s arrests of the heads of Citigroup and AIG, as Moore attempts to do in the film? Boycott airlines that pay their pilots diddly? Become squatters in foreclosed McMansions? In response to a question from the audience, Moore did explain that campaign finance reform must be the number one priority. “You have to get the money out of politics,” he said. “There is no way for us to compete with Wall Street.” He also chastised the White House for endorsing a public option health plan instead of a single-payer insurance program, exclaiming, “you don’t start with your compromise.” Yet he urged progressives to push Obama, not pile on.

Moore is a talented filmmaker with an eye for the clever gotcha, not a political theorist or a movement leader. So as he raises critical questions about the United States—yeah, why is it that we insist on democracy in government, but not democracy in the workplace?—it may not be fair to expect him to supply the answers. But Moore should be flattered if filmgoers leave the theater disappointed that he hasn’t given them a ten-point program of political and economic reform to take home.

As for going soft on Obama, it’s clear that this often-acerbic, in-their-face social critic yearns for…yes, hope. At the after-party, I kidded Moore about his light treatment of the Obama administration, which has continued the Bush-Cheney bailout policies he decries. “I’m giving Obama until the start of the NBA season,” Moore replied. He paused for a moment: “I mean the real season. Not the pre-season.” Note to White House: the first game is October 27.