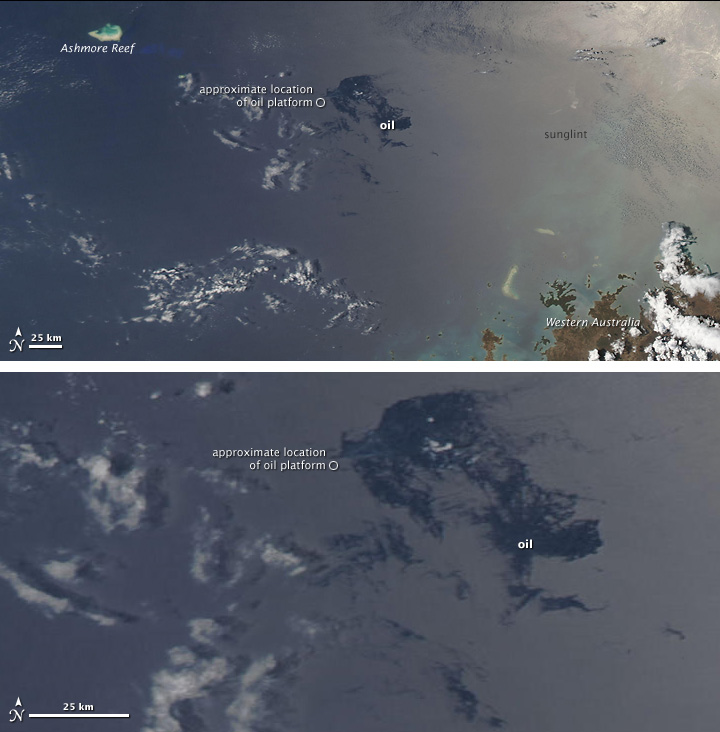 It’s been two months to the day since I posted here about a major oil leak spewing from a wellhead in the Timor Sea northwest of Australia. At the time officialdom was predicting it might takes weeks to cap.

Well, it’s been 9 weeks and crude oil and gas condensate are still leaking. Thai energy company PTTEP has so far tried and failed to cap the mess three times. Their estimate for success remains firm at “weeks.”

A wide range of marine wildlife—dolphins, sea birds, sea turtles, whales, dugongs—is under threat from the 2,500-square-mile slick. The spill is also crossing an oceanic superhighway for migrating marine life.

The images are from NASA’s Aqua satellite and posted at their Earth Observatory (mission: to share images, stories, and discoveries about climate and environment emerging from NASA research). The top picture shows the area around the damaged oil platform in relation to the northwest tip of Australia. The lower image shows a close-up of the slick (dark blue) and the leak (small circle).

Oil slicks on the ocean are often imperceptible in natural color images. But when they appear in the sunglint—that is, where the mirrorlike reflection of the Sun washes out the image—they sometimes become visible. As seen here.

UPI reports the leak is difficult to contain or assess because it’s about 2 miles below the surface. PTTEP claims it’s leaking 400 barrels a day. Australia’s Department of Resources, Energy and Tourism calculates it’s more like 2,000 barrels of oil a day.

Let’s see, 2,000 x 9 weeks = 126,000 barrels. That’s about half what the Exxon Valdez dumped. Not to mention which we’re still seeing the devastating effects of that spill 20 years later.

More interesting, in a way, is how little attention this slow-motion disaster is garnering. If only there was a ship cracked up on the rocks. As it is, without pictures, there’s no story. NASA is trying. But the little circle and the dark blue in the sunglint just can’t cut through the fog of Dancing With the Stars.