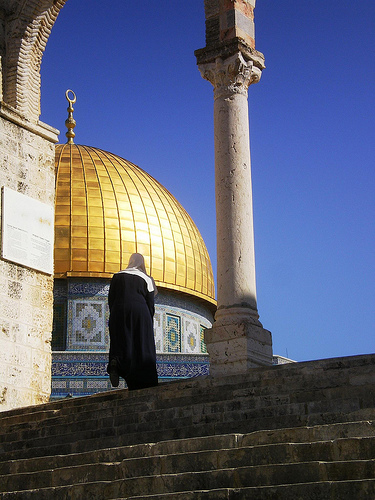 The Mideast news world is abuzz with talk of a possible third intifada, with Al-Jazeera, Ha’aretz and the Guardian all quoting senior Palestinian negotiator Saeb Ereka’s accusation that “Israel is lighting matches” in Jerusalem.

After intermittent rioting, stone throwing and rubber bullets, Jordan has asked Israel to close the area around Haram al-Sharif to non-Muslims, which has been closed in the past when tensions were high. Though conditions aren’t as bad as they could be, experts warn that stalled peace talks and lingering ire over January’s Gaza War (complete with damning UN report) could be incubating another uprising. The timing could be better: the second, or Al-Aqsa Intifada (named for the mosque at the center of the current controversy) began nearly nine years ago to the day, and observant Jews are flocking to the nearby Western Wall for the festival of Sukkot.

“There were Palestinian worshippers who turned up for morning prayers. They were told by the police force that anyone under the age of 50 would not be allowed through,” Al Jazeera’s Sherine Tadros, reporting from Jerusalem, said.

“There are [at present] about 7,000 Jewish worshippers attending a prayer, a blessing at the Wailing [Western] Wall, which is just at the foot of the Haram al-Sharif.

“This is one of the three times during the year in which Jewish worshippers are told to go to Jerusalem and pray.”

Sheikh Ra’ad Salah, the branch’s leader, called on all Muslims on Monday to come to Al-Aqsa Mosque and remain inside for as long as it takes “to protect Al-Aqsa.” He told an Arab television station that the Israeli occupation seeks to build a synagogue on Al-Aqsa Mosque.

On Monday Mahmoud Abbas, the Palestinian president, told Yemen’s state-run television that Israel was “working on a daily basis to Judaise Jerusalem.”

Although Palestinians would agree with Abbas’s concern, his comments also helped deflect a widespread frustration among many Palestinians at his decision last week to drop support in the UN Human Rights Council for a vote to endorse a highly critical UN inquiry into the Gaza war.