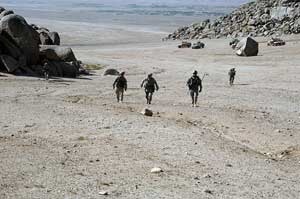 For much of this past week, White House press secretary Robert Gibbs has been fielding a flow of questions about the Afghanistan war—especially queries about the three-hour pow-wow President Barack Obama held with his entire national security team on Wednesday to discuss the road ahead in Afghanistan. At Thursday’s daily briefing, Gibbs wouldn’t say much about what had been discussed in the Situation Room during that meeting. “The President got a chance yesterday to hear from—a robust discussion with the intelligence community and robust discussion with military and diplomatic advisors,” he said, using routine press secretary-speak.

Gibbs did note that there had been no discussion about sending more troops. But he didn’t say anything about the debate now underway in the administration between those who support the call of Gen. Stanley McChrystal, the commander of US and NATO forces in Afghanistan, for expanding the war effort there into a full-fledged counterinsurgency operation with more troops (which would entail building up the Afghan government and military to defeat the Taliban), and those who favor a more narrow approach focused on counter-terrorism (which would mainly target al Qaeda). But Gibbs did signal what might become an exit strategy—or an exit excuse—for the Obama administration.

For two days in a row, Gibbs had declined to answer queries about the firing of Peter Galbraith, the United Nations’ number-two man in Afghanistan and the top American at the UN mission there. Galbraith was canned after advocating a more vigorous response to the fraud that occurred during Afghanistan’s recent and still-disputed presidential election. When a reporter on Thursday pressed Gibbs on the issue, he said, “I’d push you to the UN as a UN personnel matter.”

Moments later, I took a different crack at this. Noting that Abdullah Abdullah, the chief rival to Afghan President Hamid Karzai in the election, called Galbraith’s firing “the first sign that fraud is victorious over the law” and that McChrystal’s recent assessment of the war pointedly notes that widespread corruption in Afghanistan is a fundamental problem, I asked Gibbs:

What can the Obama administration do, as it weighs options in Afghanistan, about corruption in Afghanistan? And if you don’t deal with that, do you have a way of handling Afghanistan with a corrupt government in place?

The answer I received was a bit surprising. First, Gibbs said, “I don’t think you could find anybody with any international expertise that didn’t strongly believe that you had to have a willing partner to make anything succeed in Afghanistan.” That was par for the course. But Gibbs went on to say that the Afghan government must

demonstrate to the world their ability to receive international aid and put it to use not for cronyism but for worthwhile development projects that, through economic development, will increase and sustain the security of the Afghan people. Without a willing partner, one that is free of corruption and transparent, I don’t think any situation or any series of meetings can adequately solve for the Afghan people the problem that that would contribute to.

A willing partner that is free of corruption and transparent. Gibbs was setting a rather high bar. At the present moment, the Afghan government doesn’t come close to meeting that standard. (One reporter later quipped, “That means we couldn’t work with the Italian government.”) And what are the prospects that the Afghan government can be transformed to be free of corruption? Or even half-free of corruption? This was a different view than the one expressed by Ambassador Richard Holbrooke, the administration’s special envoy for Afghanistan and Pakistan, who has referred to the allegations of election fraud in Afghanistan as normal for a democracy.

Might Gibbs have been foreshadowing an escape clause under consideration within the administration? If the Afghan government is too corrupt to work with, President Obama could well justify a decision to reduce or narrow—or not expand—the US war effort there. It seems clear that there is a group of administration officials who are not eager to follow McChrystal into a long and dark tunnel that may or may not have light at the far end. If Obama does not accept the recommendations of the top commander in Afghanistan, he will be assailed as a defeatist by hawks (be they neoconservative pundits or GOP legislators), who will accuse him of undermining the troops already there. Yet Obama and his aides could beat back this charge by contending that the United States cannot mount a successful counterinsurgency mission in Afghanistan without a competent Afghan government and military that has the support of the public. Corruption can be something of a get-out-of-Afghanistan-free card for Obama. Could Gibbs’ remark be a clue that such an getaway is being pondered or planned? Or did he simply go too far in stating the obvious?