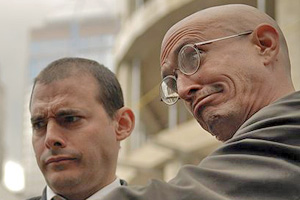 Image by Wikimedia Commons user <a href="http://commons.wikimedia.org/wiki/File:The_Yes_Men.jpg">Tavis</a> used under a CC License

As news of the Yes Men’s prank on the Chamber of Commerce spread this morning, I phoned the contact listed on their phony press release announcing the Chamber’s change of heart about climate change. I left a message for supposed Chamber flack Erica Avidus, and a couple of hours later I received a call from Andy Bichlbaum, one half of the Yes Men (he’s the one on the right). “Are you Erica?” I asked him. “I guess so,” he said, sounding a little giddy. He’d been watching some “hilarious” cable clips from his fake press conference and was basking in the absurdist glory. Speaking as himself, he talked more about the Yes Men’s latest feat and why it took a sham Chamber of Commerce to reveal that the real Chamber’s climate policy is “a big hoax on the American public.” Bichlbaum, who’s gone by aliases such as Jude Finnisterra and Hank Hardy Unruh, also did some linguistic analysis of the real Chamber spokesman’s name, concluding that he, too, is just another fake.

MJ: How long have you been planning this? When did the Chamber of Commerce show up on your radar screen as a potential target?

AB: They showed up as soon as these defections started happening. We planned this about a week and a half ago. The Chamber’s absurd stance is really what inspired us, of course. The US is the one thing that’s holding up the talks in Copenhagen and we have to send Obama to Copenhagen with a climate bill; even though the Kerry-Boxer one isn’t great, it’s something. And the chamber is opposing climate change legislation and the whole rest of the world is saying we need to do something. Even a lot of big companies are saying we need to do something. The chamber, representing the biggest and stodgiest and most powerful corporations in America is just saying, “Nah, let’s let the whole planet go to rot.” We just wanted to show what it would look like if they didn’t take that absurd stance. And none of the reporters in the room were really surprised.

MJ: The press conference was interrupted by the Chamber’s spokesman, Eric Wohlschlegel.

MJ: He claims to be their spokesman?

AB: He claims to be executive director of communications for the Chamber. Wohlschlegel—if you look up that word in German, “wohl,” I think means strong and “schlegel” means something like hammer. So you know what kind of person whould have “strong hammer” as a surname. It’s clearly a joke. [For the record: Wohlschegel really is the Chamber’s communications guy.] The Chamber’s position on climate change is clearly a big hoax on the American public. They’re clearly just making fun of us, saying that it’s not important or we don’t need climate legislation, that we need a Scopes Monkey Trial. They’re just making fun of us and they’re proving that they’re completely illegitimate and a fake entity.

MJ: In your fake press release you say that the Chamber represents 300,000 businesses. But the real chamber likes to say it represents 3 million, as my colleague Josh Harkinson has been reporting.

AB: Right! See, we’re even more honest and accurate than they are even when we’re trying to hoax them. it’s just pathetic.

MJ: Have you gotten any more response from the Chamber, besides the spokesperson saying what you were doing was a fraud and breaking the law?

AB: Not yet. We have sentinels posted at various courtrooms to catch them lodging a motion against us or something. But they seem to be laying very low. I think they said it’s a very sad day. And it is.