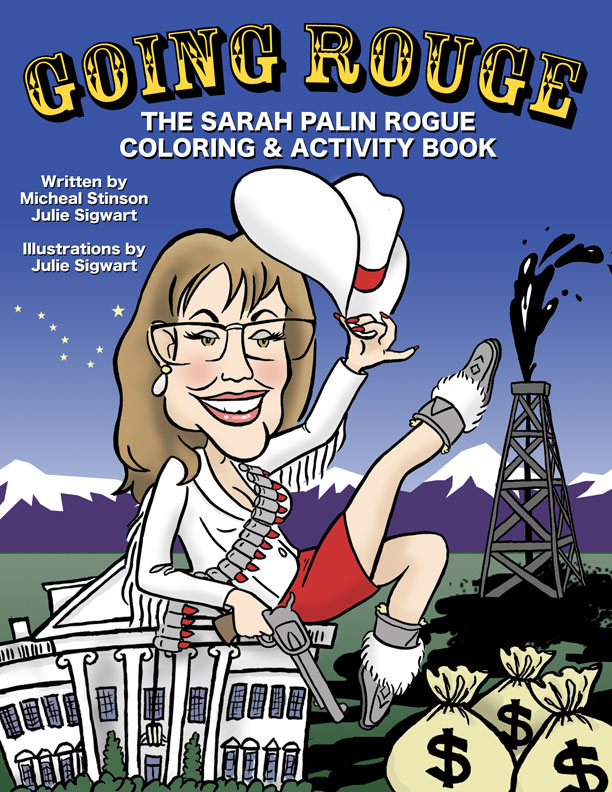 Thanks Oprah, we’ve all heard. Sarah Palin kicks off her book tour in earnest this week, endlessly plugging Going Rogue: An American Life, her account of what really happened with John McCain’s mean spindoctor-people and bad boy Levi Johnston and other scandals we were only mildly interested in six months ago, before Mad Men got started.

What you may not have heard is that another book, by Michael Stinson and Julie Sigwart, also hits bookstores today. It’s called Going Rouge: The Sarah Palin Rogue Coloring & Activity Book, and it has already earned mentions in the New York Times and the Washington Post.

So it’s time for a showdown. Memoir vs. Coloring Book. No one’s done it yet, so I’ll break it down for you: Five reasons to go Rouge rather than Rogue this year.

1) For the planet’s sake. Going Rogue: An American Life is a whopping 432 pages and 1.4 lbs. That’s a lot of paper. It’s also more than I want to read, especially about a person whose existence I was blissfully ignorant of prior to August of 2008. By contrast, Going Rouge: The Sarah Palin Rogue Coloring & Activity Book is 48 pages, and I think it still sums up Palin’s message pretty clearly.

2) Juicy bits of Palin’s book are available online, and for free. We’re in a recession. Save your $28.99 on the hardback. Excerpts and summaries abound online, courtesy of The Huffington Post, Drudge Report, Wonkette, and others. Plus, all the time you’ll have saved can be better spent doing fun activities in Going Rouge, such as a word search.

3) Palin’s book goes rogue on facts. The AP has invested precious resources in the form of 11 fact-checking reporters whose combined powers told us what we all could’ve guessed: Palin’s book is strong on rhetoric but soft on facts. (On her Facebook page, Palin claims AP is “erroneously reporting” on her book, but she doesn’t actually say what the errors are.) So we’ll go with AP for now: Read it only if you enjoy fiction more than you enjoy coloring.

4) Going Rouge appeals to future voters. Don’t know how to read yet? That’s okay! Unlike Going Rogue and the Republican Party, Going Rouge: The Sarah Palin Coloring & Activity Book is suitable for all ages. In fact, it caters to the youngsters by getting them thinking about the future of our country with activities that include coloring and cutting out Palin 2012 campaign buttons. Educational, and good for practicing motor skills.

And finally, if you’re like some of us and you’re totally Palin-ed out, that’s okay. We’re just saying, if you’ve got to buy something, choose your Palin product wisely. Happy coloring!