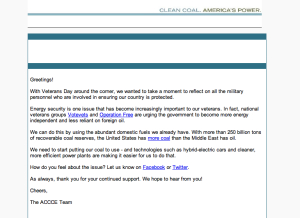 The coal front group American Coalition for Clean Coal Electricity has been in hot water lately for employing an astroturf group that forged letters to Congress opposing the House climate bill—and then for possibly lying under oath about their position. Now ACCCE is in trouble again—for misrepresenting the views of two major veterans groups in an email hyping coal’s role in energy security.

The email, sent in anticipation of Veterans’ Day, argues that coal can play a vital role in reducing America’s dependence on foreign oil and cites two groups—VoteVets and Operation Free. The problem: both of those groups are strong supporters of climate legislation—in part because of the national security threats posed by global warming—while ACCCE has been working energetically to undermine a bill.

With Veterans Day around the corner, we wanted to take a moment to reflect on all the military personnel who are involved in ensuring our country is protected.

Energy security is one issue that has become increasingly important to our veterans. In fact, national veterans groups Votevets and Operation Free are urging the government to become more energy independent and less reliant on foreign oil.

We can do this by using the abundant domestic fuels we already have. With more than 250 billion tons of recoverable coal reserves, the United States has more coal than the Middle East has oil.

We need to start putting our coal to use – and technologies such as hybrid-electric cars and cleaner, more efficient power plants are making it easier for us to do that.

“This is insulting to all of the Veterans who are fighting to protect America’s national security by supporting clean, American power,” wrote David Solimini, Operation Free’s media director, in a blog post.