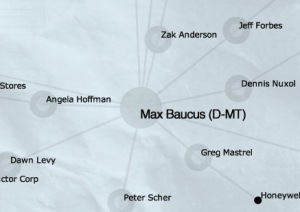 There was just one “no” vote on advancing a climate and energy bill among the Democrats on the Environment and Public Works Committee last week: Max Baucus. Now the Montana senator plans to claim jurisdiction over significant portions of the bill in his role as chair of the Finance Committee, starting with a hearing on the topic this morning.

Baucus, who has advocated for lower near-term emissions targets and provisions to lower the overall costs of a climate bill, is probably hearing from lobbyists of all stripes these days. But none are likely to have his ear like the dozen former staffers who are now lobbying on climate and energy policy for groups like the American Petroleum Institute, the Business Roundtable, Koch Industries, and the National Biodiesel Board. The Sunlight Foundation put together a chart illustrating the relationships between Baucus, his former staffers, and their clients.

Former Baucus staffers are now lobbying on behalf of clients who both support and opposed climate legislation. The includes four former chiefs of staff who have gone through the revolving door. Among them is former chief of staff David Castagnetti, who works for Mehlman Vogel Castagnetti and represents a number of groups who oppose the legislation or have sought to weaken it, like the American Petroleum Institute, the Business Roundtable, Edison Electric Institute, the Air Transport Association of America and Koch Industries.

Michael Evans, a former legislative director, now works at K&L Gates, and has clients ranging from the Environmental Defense Fund, which is staunchly pro-climate bill, to Peabody Coal, one of the largest coal companies in the country and a fierce opponent of carbon regulations. Former chief tax counsel Nick Giordano, now at Ernst & Young, lobbies for Boeing Co., Exxon Mobil, General Electric, National Biodiesel Board, the National Hydropower Association, and the Solar Energy Industries Association.

Ethics rules only require a one-year “cooling off” period before staffers-turned-lobbyists can approach their former bosses.