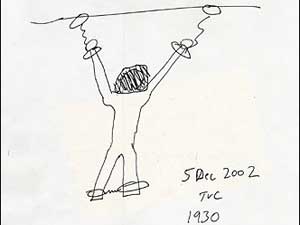 A sketch by Thomas V. Curtis, a former Reserve M.P. sergeant, showing how a detainee in Afghanistan was allegedly chained to the ceiling of his cell. (<a href="http://commons.wikimedia.org/wiki/File:Bagram_prisoner_abuse.184.1.450.jpg">Wikimedia Commons</a>).

Defense Secretary Robert Gates has used powers granted to him by a controversial new law to block the court-ordered release of numerous photos of detainee abuse, government lawyers revealed in a court filing [PDF] Friday evening.

Gates’ new authority comes from a law, signed by President Barack Obama last month, that gives the Secretary of Defense the power to rule that photos of detainees are exempt from release under the Freedom of Information Act. Gates’ action on Friday was the first use of the new FOIA exemption since it passed Congress last month. The photos in question are the subject of a years-long legal fight by the American Civil Liberties Union, which first filed a FOIA request for records pertaining to detainee treatment, rendition, and death in May of 2005. The case is currently being reviewed by the Supreme Court.

The administration first sought to change FOIA in June, shortly after deciding to contest a ruling by the Second Circuit Court of Appeals that ordered the photos’ release. The resulting bill, championed by Sen. Joseph Lieberman (I-Conn.), was specifically designed to nullify the effect of the appeals court’s ruling. Since the court had ruled that the photos couldn’t be withheld under an existing FOIA exemption, the Obama administration simply asked Congress to carve out a new exemption. Despite objections from liberal members of the House, Congress obliged.

The new exemption’s requirements are stunningly lax. In order to withhold the photos, Gates simply had to certify, as he did in the court filing, that “public disclosure of these photographs would endanger citizens of the United States, members of the United States Armed Forces, or employees of the United States Government deployed outside the United States.” In other words, their release had to endanger someone, somewhere. And in the unlikely event that Gates had to stretch the truth to make that certification, it wouldn’t matter, since there’s no provision in the law that allows any court to review Gates’ determination or rule on whether it was truthful.

This isn’t just a few photos. Gates’ block could apply to a far larger group of images than the 44 that are at issue in the ACLU’s lawsuit. “The photographs include but are not limited to the 44 photographs” in the suit, Gates wrote in his certification. The extension of the ban beyond the 44 photos is the result of a flip-flop by the Obama administration. The Obama administration had originally planned to comply with the appeals court’s order to release the photos. In April, Justice Department lawyers informed the ACLU in a letter [PDF] that the government planned to release the 44 photos and a “substantial number” of other images—over 2,000, according to some reports. But three weeks later, the administration changed course and decided to contest the appeals court’s decision and pursue a legislative workaround. Now it appears that Gates has blocked the release of a large number—perhaps all—of the extant photos depicting abuse during the period from September 11th until the end of the Bush administration.

The administration undoubtedly has its reasons for withholding the photos. It’s certainly possible that the release of more photos could help terrorist recruitment or further enrage anti-American sentiment abroad. But make no mistake. The new FOIA exemption that the Obama White House sought and obtained has one obvious result: shielding evidence of government lawbreaking, abuse, and torture under the Bush administration from public scrutiny. So much for Obama’s claim that “transparency and the rule of law will be the touchstones of this presidency.” There’s a name for what the Obama administration did on Friday. It’s called a coverup.

Nick Baumann covers national politics for Mother Jones‘ DC Bureau. For more of his stories, click here. He can also be found on twitter.