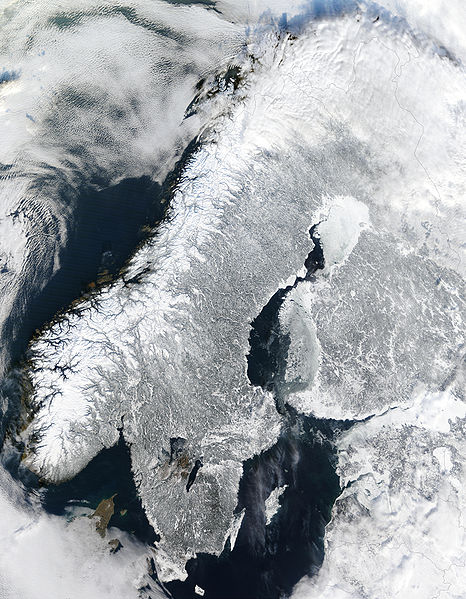 Freako-frakkin-nomics notwithstanding, climate change is a thing of violent swiftness. New research indicates it took only months for Europe to freeze solid 12,800 years ago.

The most precise analysis yet of the onset of the “Big Freeze” reveals that Europe froze not in a decade—as previously thought from analysis of Greenland ice cores—but in less than 12 months.

The Big Freeze was triggered by the slowdown of the Gulf Stream. It terminated the Clovis culture, the dominant culture in North America at the time. Once triggered, the cold persisted for 1,300 years.

New Scientist reports on the research of William Patterson of the U of Saskatchewan whose group studied a mud core from ancient Lough Monreagh in Ireland, slicing layers 0.5 to 1 millimeter thick to study three-month intervals. No prior measurements from this period have approached such fine detail.

Turns out, at the start of the Big Freeze temperatures plummeted and lake productivity ceased within months or a year at most. Patterson presented the findings at the BOREAS conference in Finland. According to him (via New Scientist):

“It would be like taking Ireland today and moving it up to Svalbard.”

We know the Big Freeze was triggered when a glacial lake covering most of northwest Canada burst its banks and poured into the North Atlantic and Arctic Oceans, diluting oceanic salinity (I wrote of fears of this in MoJo’s The Fate of the Ocean) and rerouting the oceanic currents that deliver climate to the Northern Hemisphere:

Two studies published in 2006 show that the same thing happened again 8,200 years ago, when the Northern hemisphere went through another cold spell. Some climate scientists have suggested that the Greenland ice sheet could have the same effect if it suddenly melts through climate change, but the 2007 report of the Intergovernmental Panel on Climate Change concluded this was unlikely to happen this century.

Well, that’s out of date. We already know Greenland is turning to slush frighteningly fast.

Patterson’s team have now set their sights on even more precise records of historical climate. They have built a robot able to shave 0.05 micrometer slivers along the growth lines of fossilized clam shells, giving a resolution of less than a day. “We can get you mid-July temperatures from 400 million years ago,” he says.

Hey, Barack Obama, you know, The Day After Tomorrow could happen after all. On your watch. One season all balmy in the Northern Hemisphere. The next a frozen hell. Sure you don’t want to go to Copenhagen before the glaciers block your route?