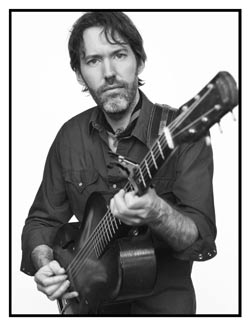 Last week, Nashville-based guitarist Dave Rawlings, best known for his collaboration with Gillian Welch, released his first solo record, titled A Friend of a Friend. Rawlings appears on all of Welch’s albums and has become known for his ephemeral voice and intricate guitar picking. His style is a mix of country, old-time, bluegrass, and rockabilly. Mother Jones talked with Rawlings about his first guitar, concert fiascoes, and what it’s like to be in Gillian’s shadow. Click here to listen to an extended podcast of our interview.

Mother Jones: How did you start playing music?

Dave Rawlings: When I was probably just about 16, I was walking home from a pizza parlor with one of my best friends, and he said, “Why don’t you get a guitar for Christmas and I’ll get a harmonica, and we can play ‘Heart of Gold,’ the Neil Young song, in the talent show.” And as soon as I had a guitar I loved it, and I started playing in every spare moment.

DR: When I played with the Esquires, the two of us and our friend David Steal decided to go and play Chuck Berry songs and Tom Waits songs and things like that at a couple local bars in Nashville. That was probably ’round about 1998. But I taped a few of the shows; I know what they sounded like. It was never anything too exciting, but it was fun.

MJ: How did you get into the country, string music?

DR: I answered an ad in the back of the paper to join a sort of working country band that played at honky-tonks and roadhouses up there on weekends. I did that partially because I was learning about country music and I loved lots of different kinds of music, but also because, you know, it paid. And it let me quit my part-time job.

MJ: So this is your first solo record after cowriting so much music with Gillian Welch. What’s it like not having your name on all these albums, when you’re such an important part of the music?

DR: She is talented enough as a singer and a writer that she could make an album of records that she wrote all the songs by herself, and it could be wonderful. That, combined with the fact that when we were starting, we didn’t feel like picking a band name and playing under some larger name for two people, and the “Gillian Welch and David Rawlings” part of it seemed really ungainly. I never wanted to see that on a marquee.

MJ: Tell me about your biggest concert fiasco.

DR: We did a show in South Carolina one time where a truck hit the transformer across the street and we lost all the power. So we had to play the first part of the show with no amplification whatsoever. There was a brownout once in Boston where we played an entire candlelit show.

MJ: So A Friend of a Friend I think is actually funnier than a lot of the Gillian Welch albums that have come out. What are the big differences you see between your own music and Gillian’s?

DR: The lead singer isn’t as good, which is one thing. But I feel like my singing style is a little more rambunctious. When Gillian and I started playing concerts with just the two of us, but under my name, we both noticed that we played a little harder on our guitars and sang a little louder—that the overall feel was a little lighter in that way. It wasn’t quite as moody.

MJ: What’s your favorite track on A Friend of a Friend?

DR: The thing I was most surprised with in a way—was the proudest of—was the fact that I was able to finger-pick a song and sing it by myself just as a solo track, and we felt that it was good enough to release. Just because it never dawned on me that I would be able to play something by myself and it would be okay. So I guess that would be “I Hear Them All.”

MJ: Is the Dave Rawlings Machine here to stay?

DR: There’s a good chance there will be another record in the future. I’m planning on it. Whether or not I will succeed is another issue. Gillian’s record is partially done. I think once we get that out, we might turn our attention back to making another one of these records.