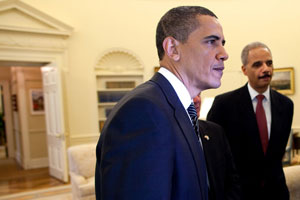 Wednesday’s Senate Judiciary Committee hearing on the Justice Department’s decision to prosecute Khalid Sheikh Mohammed and four other accused 9/11 plotters in civilian courts was bound to be contentious. Senate Republicans didn’t disappoint, moving quickly to accuse Attorney General Eric Holder of putting politics ahead of national security by prosecuting KSM blocks away from where the twin towers once stood. Holder stood his ground. “There was not a political component to my decision,” he insisted.

It’s true that at first glance, Holder’s decision doesn’t seem to have much to do with politics. The Justice Department’s current plans—to try some terrorist suspects in the US court system but not others—are drawing fire from both liberals and conservatives. Influential commentators like the Atlantic’s Marc Ambinder have argued that the decision is so politically toxic it must be non-political. “If this is politics, it’s really dumb politics,” Ambinder writes. “And that’s why it’s probably not politics.”

Ambinder argues that Occam’s razor—the logical principle that the simplest explanation is most likely to be correct—supports his theory. But Occam’s razor suggests that Holder, like every Attorney General before him, considers the political ramifications of all his decisions before he makes them. It would be truly remarkable for any AG to do otherwise.

When you think about it, the Obama administration’s decision on how to deal with terrorist suspects—upsetting both the left and the right—fits in perfectly with the Andrew Sullivan theory of Barack Obama. Sullivan believes that Obama and his team play the long game (Obama claims as much in interviews) and don’t worry too much about the short-term politics of their decisions. Bringing people like KSM to trial doesn’t have much public support right now (just 29 percent of Americans support this move, according to a recent Rasmussen poll). If you want to bring terror suspects to trial in the future, you’re going to need to change the paradigm. But wholesale change—trying all of the Gitmo detainees in federal court—could be politically disasterous. So you start with a few, high-profile trials—provided you firmly believe they will result in convictions and ultimately bolster support for working within the US justice system to try more terrorism detainees. You take some knocks now from civil libertarians who are upset that you’re only trying five people in federal court and from conservatives who are upset that you’re trying anyone. But neither side is truly enraged because neither side has truly lost. Meanwhile, you’re changing the only minds that matter—those of the American people.

The administration’s strategy is already demonstrating its short-term political usefulness, too.  As the judiciary committee’s ranking Republican member, Alabama’s Jeff Sessions, interrogated Holder on Wednesday morning, the AG repeatedly brought up his decision to send Abd al-Rahim al-Nashiri, the accused planner of the 2000 attack on the USS Cole, to a military commission. In essence, Holder used the al-Nashiri decision as a shield against conservative criticism. Every time Sessions hit him for transferring KSM to federal court, Holder brought up the administration’s continued use of the military commissions. You can bet that when the administration gets hit from the left over al-Nashiri, they’ll bring up the KSM trial. Either way, they’ll have a counterargument. Being in the middle can have its benefits. The only charge they’ll have trouble rebutting is one of inconsistency.