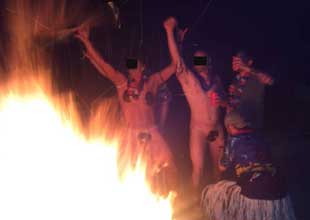 The Animal House antics of ArmorGroup North America’s guards have cost the company its 5-year, $189 million State Department contract to protect the US embassy in Kabul. Following a months-long review, the agency has decided it won’t renew the contract, as it has done for the past two years, when it comes due in June, according to State Department spokesman Fred Lash. “The department’s Office of Aquisitions Managment, Bureau of Diplomatic Security, and Embassy Kabul reviewed the contract and concurred that the next option year should not be excercised and that work should begin immediately to compete a new contract,” Lash told me.

This turn of events won’t come as much of a surprise to anyone who’s viewed the lewd pictures of the company’s personnel engaged in all manner of bacchanalian behavior. But the real question is why it took an international incident for the State Department to remove AGNA from the embassy job in the first place. Serious complaints about AGNA’s performance emerged almost as soon as the company took over security at the embassy in the summer of 2007. That July, the State Department sent the first of at least nine warnings to the company, this one noting that “deficiencies” in AGNA’s work were of such magnitude that “the security of the U.S. Embassy in Kabul is in jeopardy.” For nearly two years, the agency continued to warn ANGA repeatedly about its performance and even threatened to replace the company, yet twice renewed the contract. Worse still, according to a lawsuit filed by AGNA’s former director of operations, James Gordon, the State Department was alerted way back in June 2007 that AGNA recruits were engaging in the very same variety of “lewd, aberrant, and sexually deviant behavior” that ultimately ended up embarassing the Obama adminstration in September, after the Project on Government Oversight exposed a pattern of misconduct and performance lapses by the company in a letter to Secretary of State Hillary Clinton.

“The State Department seems to be holding this Embassy security contractor accountable,” POGO’s executive director, Danielle Brian, said in a statement. “But State will need a real culture change before it can provide adequate oversight of these complex and challenging contracts.”

ArmorGroup employees were informed of the State Department’s decision on Monday in an email that was obtained by POGO and written by Frank Schaddellee, the deputy project manager at Camp Sullivan, where ArmorGroup’s personnel live (and, prior to the embassy scandal, held wild parties). “Changing out contractors is primarily a political decision based on the unfortunate and embarrassing events that occurred here several months ago,” Schaddelee wrote. “There are serious consequences when things like that happen.”