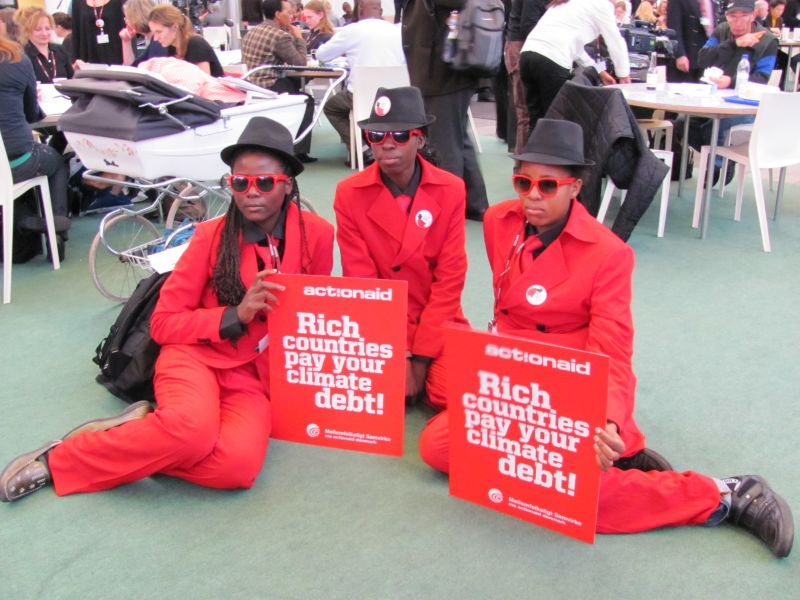 One of the most hotly contested issues at Copenhagen is the question of what, if anything, the US and other industrialized countries owe the nations least responsible for the accumulation of planet-warming gases in the atmosphere.

The United States has said that over the next three years it will commit $1.4 billion annually to a $10 billion short-term fund intended to help developing nations cope with the effects of climate change. The European Union volunteered last week to chip in $3 billion.

But that still leaves the question of how much rich nations will pony up over the long haul. The United Nations estimates that poor countries will need as much as $170 billion per year to adapt to climate change—$50 billion more than developed countries spent on aid in 2008. Other development groups have estimated that this task could cost two to three times that much. So far, rich countries have indicated that they’re only prepared to offer around $100 billion.

Developing nations, many of which are especially vulnerable to climate change, have balked at the prospect that Copenhagen may not produce a sizeable financial commitment from the countries that have contributed most to the warming of the planet. Lumumba Stanislaus Di-Aping, the Sudanese chairman of the Group of 77, the bloc of least-developed nations, suggested on Thursday that an appropriate fund should total around $200 billion. On Friday his estimate had risen to $400 billion. Dessima Williams of Grenada, who chairs the Alliance of Small Island States (AOSIS), has suggested a figure in the range of 1.5 percent of the GDP of developed nations. “It must be responsive to the damage that’s already done,” said Williams.

Whatever the number, the prevailing sentiment in the developing world is that the United States and other big polluters must pay up. “It was not us who put the waste in the atmosphere, but we are the first to suffer from that,” said Antonio Lima, a delegate from Cape Verde and the vice president of AOSIS. “Those who put the waste in the atmosphere have to clean it.” But negotiators for the most vulnerable nations worry that the matter of climate aid will not be adequately addressed. “We are afraid they are not going to take care of us in this process,” Lima said.

While the US has indicated that it will contribute money to help poor nations deal with climate change, negotiators have categorically rejected the idea of a climate “debt.” “I actually completely reject the notion of a debt or reparations or anything of the like,” said US climate envoy Todd Stern. “I mean, let’s just be mindful of the fact for most of the two hundred years since the industrial revolution, people were blissfully ignorant of the fact that emissions caused a greenhouse effect. This is a relatively recent phenomenon, so I think that’s the wrong way to look at this,” he continued. “We absolutely recognize our historic role in putting emissions in the atmosphere up there that are there now, but the sense of guilt or culpability or reparations, I just categorically reject that.”

And the dollar figure for climate financing isn’t the only flashpoint. Another sensitive subject is whether any of this money should go to China and other rapidly developing economies. Last week Stern shot down that idea, too. “I don’t envision public funds—certainly not from the United States—going to China,” he said. His remark prompted some tough talk from Chinese Vice Foreign Minister He Yafei. “I don’t want to say that the gentleman is ignorant,” he said—before adding that Stern “lacks common sense” and is “extremely irresponsible.”

So as the second week of talks begins, the message from developing nations has become overwhelmingly clear: Show us the money.