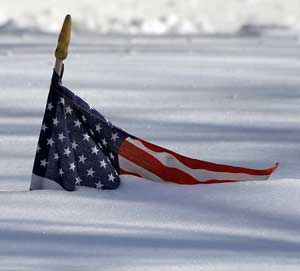 After the major emitting countries agreed to the hastily made Copenhagen Accord late Friday night, President Barack Obama rushed onto Air Force One and jetted back across the Atlantic. He was presumably eager to get to Washington, DC before the big winter storm that was due to arrive on Saturday. The president made it back just in time. But perhaps the US would have been better served had he hung around Copenhagen a bit longer.

As the UN climate conference wound down overseas, two corners of this country were buried by unusually heavy snowfalls. In addition to the foot and a half of snow that closed public schools, federal buildings, and many offices in the Capital (the DC bureau of Mother Jones excluded), Valdez, Alaska, experienced record snowstorms that dumped over 76.5 inches. The town located six hours from Anchorage along the state’s rugged southern coast managed the blizzard better than DC—amazingly, its 33-year streak without snow-day school cancellations lives on. But as the latest story from Mother Jones contributor Ted Genoways makes clear, the danger in Valdez isn’t passed until after the snow has melted.

Last May, a record-breaking heatwave caused the meltwater-swollen Yukon River to spill its banks. The resulting flood nearly wiped Eagle, Alaska, the oldest town in the interior of the state, off the map. Over the years, Eagle has captured the imaginations of explorers, writers, and romantics—among them, Jack London, John McPhee, and Genoways. In the “Last Breakup” (web head: “Will the Yukon River Claim the Alaskan Frontier”),  Genoways travels back to the historic town to tell the story of one heroic couple’s struggle for survival and to render a dramatic illustration of the danger climate change poses to even the most hearty and isolated Americans.

Skeptics are always keen to note that no single weather event can ever be directly linked to climate change. But the compelling body of anecdotal evidence from places like Eagle and Valdez only serves to bolster the rock-solid scientific and economic cases for taking immediate action to reduce greenhouse gas emissions. If the Copenhagen Accord proves a misstep on the path to preventing catastrophic climate change, citizens of Alaska and elsewhere should brace themselves for more extreme weather.