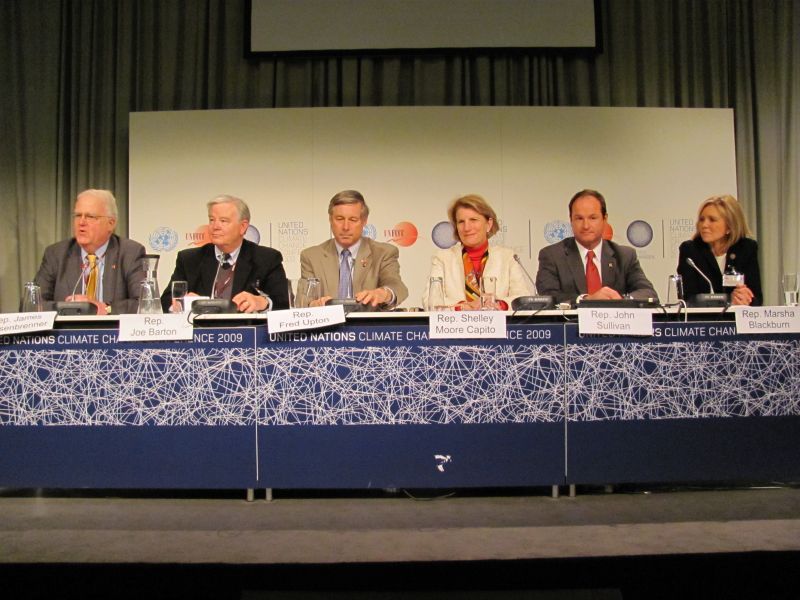 Six Republican members of Congress brought their questionable grasp of climate science to Copenhagen on Friday, hoping to capitalize on the fact that a final deal is still up in the air. Their mission, they said, was to inform the folks at the summit that the US doesn’t plan to finalize a cap-and-trade plan anytime soon. But they spent most of their presser spouting off dubious, if amusing, views on climate science.

Take, for instance, Rep. Joe Barton (R-Texas), ranking member of the Energy and Commerce Committee, who announced that “the premise that mankind through the emissions of CO2, is causing the planet to warm…has never been independently analyzed or tested by any scientific group.” Known for his unusual and unorthodox scientific views, Barton spoke at length on the matter. “I respect the Texas climatologists,” he said. “But it’s hot in Texas in the summer and it’s cold in Texas in the winter. And I can’t tell if that’s going to change much one way or another. We don’t have an ice cap in Texas, so before we make a policy decision I think it’s a fair question to try to develop a theory that appears to more fit the facts than this theory appears to.”

Luckily, Barton happens to have his own theory on carbon dioxide:

I might point out just the basic theory. CO2 is a trace gas in the atmosphere. If the volume were equivalent to a United States football field, 100 yards long, 300 feet long CO2 would make up about an eighth of an inch of that field. The dominant greenhouse gas is water vapor. The dominant temperature regulator is based on what we know about the science is cloud formation. The CO2 theory doesn’t appear to take that into account.

And on the Intergovernmental Panel on Climate Change, the world’s preeminent body of climate scientists:

The IPCC scientific group is a very insular. I don’t want to be too impolite here, but they do not appear to be interested in finding the truth as much as they appear to be interested in protecting themselves and manipulating the data in a way that proves their preconceived conclusion. That is not the scientific method that I was taught in college.

Barton suggested that the world should find some other, “credible” scientists, not just ones who actually study climate, but “statistics, analysis, and various other professions,” to decide if the planet is actually warming. He said that “there are any number of respected institutions” that could do such an assessment, listing only the National Academy of Sciences.

Perhaps Barton should check out this report by the NAS on Surface Temperature Reconstructions for the Past 2,000 Years? Or this one on Hidden Costs of Energy: Unpriced Consequences of Energy Production and Use? Or perhaps this recent statement cosigned by National Academy of Sciences President Ralph J. Cicerone, calling on world leaders to “seize all opportunities” to address climate change, which “is happening even faster than previously estimated.”

Barton’s GOP colleagues, Jim Sensenbrenner (Wisc.), John Sullivan (Okla.), and Marsha Blackburn (Tenn.), also made it plain that they think this summit of more than 45,000 people from around the world and more than 120 heads of state is based on a hoax. The perpertrators, Sullivan claimed, are scientists scamming the public to turn a profit. Sullivan, however, has surely not been swayed by the $41,700 he’s received for his 2010 campaign from the oil and gas sector, or the $506,400 he’s raised from his biggest industry contributors over his career.

And then there were the two Republican members of the delegation who attempted to make vaguely positive noises about the idea of reducing emissions while refusing to acknowledge that climate change is a problem: Fred Upton (Mich.) and Shelley Moore Capito (W.Va.). Asked directly about the subject twice, they declined to respond. “I think we can lower our emissions,” said Upton. “I think the world will be better off if we did that, and we can do it without cap and trade.”

At first pass, Capito deferred to Upton’s answer, adding, “I really believe the solutions are what we need to talk about.” Asked a second time, she attempted to explain: “I do believe that sheer population growth in this world has me believing that the emissions are higher and therefore there is more being emitted.”

Ladies and gentleman, your taxpayer-funded congressional delegation to Copenhagen.