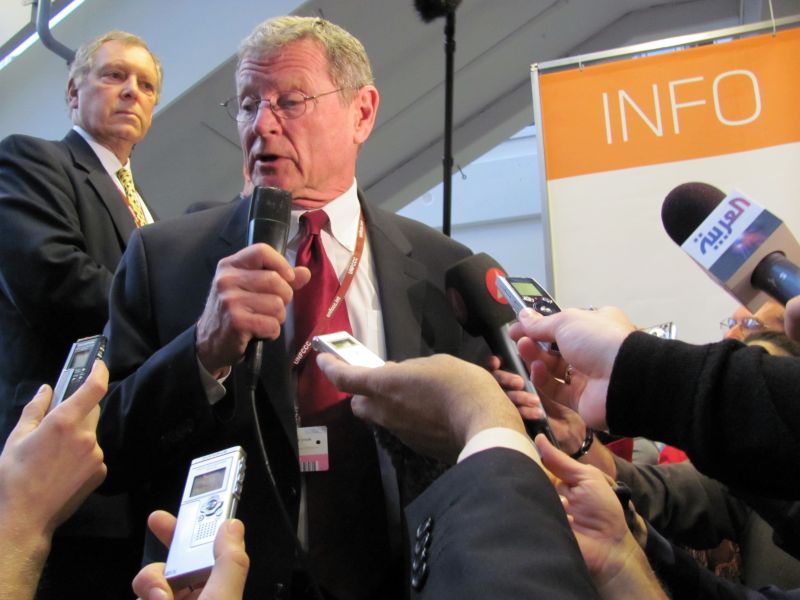 James Inhofe swooped into Copenhagen on Thursday for very important meetings … with the media.

The Oklahoma Republcan and strident climate change denier made himself available to the thousands of reporters gathered at the Bella Center in an attempt to “make sure that nobody is laboring under the misconception that the US Senate is going to do something” about climate change, he said. “There’s not a chance in the world” that the Senate is going to pass a bill, the upper chamber’s self-appointed spokesperson added. “I believe that we in the United States owe it to the other countries to be well informed, to know what the intentions of the United States are,” he said. “I just want you guys to have a shot at the truth, because you’re not getting it from other people.”

The former chairman of the Environment and Public Works Committeee (he said he “probably will be again after the next mid-term election”) had previously planned to bring an entire “Truth Squad” of GOP lawmakers to the climate summit. But in the end all he brought was himself and a gaggle of press handlers who told each reporter in the room that the senator was in town and later delivered a printed copy of his talking points. Inhofe thoughtfully gave his remarks in the press filing center, so that plenty of reporters would be able to cover his talk.

Unfortunately, delegates at Copenhagen will not get a chance to hear him. Inhofe only spent two hours on the scene—and at least a quarter of that time in the press room. He has to get back for votes in the Senate he said, as well as a debate on climate on CNN’s “Situation Room” with Rep. Ed Markey (D-Mass.), co-author of the House cap-and-trade bill.

With more than 45,000 people gathered in Copenhage for a summit on how to address a problem he doesn’t think is real, one wonders exactly who he thinks is responsible for this grand hoax. “It started in the United Nations,” he said, but “the ones who really grab a hold of this in the United States are the Hollywood elite.” If that’s true, I’ve missed all the celebs—other than California Republican Governor Arnold Schwarzenegger, who made an appearance here earlier this week. Mostly the conference is filled with diplomats, policy wonks, earnest activists, and tired reporters.

Surrounded by a giant scrum of international reporters, the senator mostly used the forum to repeat his assertions that climate change is a huge hoax, and that the recent “ClimateGate” flap is proof that he has been right all along about this. (No one outside the ranks of climate change denialists seems to have reached that conclusion). Inhofe made multiple references to a speech he gave on the Senate floor in 2003, urging reporters to revisit it.

Questioned about his schedule for his two-hour visit, Inhofe mentioned that he had “already had a couple meetings with some people here.” But when asked who those meetings were with, he replied, “It’s not significant.”