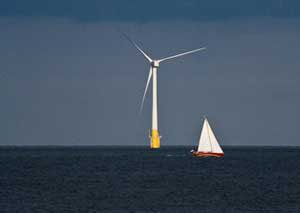 Cape Wind, the bitterly contested proposed offshore wind farm in Massachusetts’ Nantucket Sound, is approaching a critical juncture. After eight years of delays, the project will likely be approved or denied before the end of 2009. If it proceeds, the 24-square-mile, 130-turbine wind farm could generate enough electricity to power 420,000 homes—and kick-start an offshore wind industry in the United States.

But opposition to the project has been fierce, and Cape Wind needs all the help it can get. So where is the state’s senior senator? John Kerry is among Capitol Hill’s most ardent advocates of addressing climate change, but he has refused to weigh in on one of the most significant debates over the future of alternative energy—and one that’s occurring in his own backyard.

The proposed wind farm, 14 miles offshore, has been delayed for nearly a decade, thanks to a multi-million dollar opposition campaign. Some of the most prominent adversaries were the late Sen. Ted Kennedy and his family. Kennedy insisted that the project would cause environmental problems, create navigational difficulties for boats in the sound, and make the scenic area less attractive to tourists. But it’s long been suspected that he simply didn’t want rows of large, ungainly wind turbines marring the view from the Kennedy compound at Hyannis Port, just eight miles away. And as Kennedy was the undisputed dean of the Massachusetts congressional delegation, many of the state’s lawmakers deferred to his position on the matter.

Kennedy’s death coincided with the beginning of the final phase of permitting for Cape Wind. In early November, Rep. Ed Markey (D-Mass.), who had previously been quiet on the issue, sent a strongly worded letter to the Obama administration urging the National Park Service to approve the project before the Copenhagen climate talks begin on December 7.

Markey’s endorsement was a major boost—and it made Kerry’s silence on the matter even more conspicuous. Now the highest-ranking political figure in the state, Kerry is also the lead player on climate issues in the Senate. He’s the main author of the cap-and-trade bill that passed out of committee earlier this month, and he’s marshaling cross-party support for the measure.

According to sources close to the project, Kerry’s reluctance to weigh in on Cape Wind stems from continued deference to the Kennedy family. But the majority of Democratic politicians in the state have now embraced the project. All four of the Democratic candidates vying to fill Kennedy’s seat support it, as does Gov. Deval Patrick and the majority of the state legislature.

In an email statement from Kerry to Mother Jones, he said he is not yet ready to make an announcement on Cape Wind. “I support wind technology, and I want more renewable energy powering more homes in Massachusetts, not less, and I’m talking with leaders in the state and at the federal level about this, and I’ll have more discussions in Massachusetts with my constituents before I make a final announcement,” he said.

But in a 2007 posting about the “controversy” on his website, Kerry suggested he was no fan of the proposal. “You can’t just have someone plunk something down wherever the hell they want,” Kerry wrote, questioning “whether this is the best location.”

The National Park Service will soon make the final decision on whether to allow Cape Wind to go ahead. With its fate hanging in the balance, support from Massachusetts’ senior lawmaker could prove critical. The big question is: Will John Kerry step up?