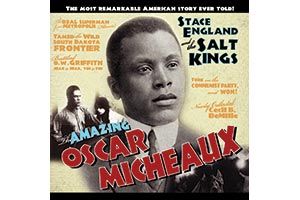 The Salt Kings are a scruffy alt-country quartet from Illinois; Oscar Micheaux was a legendary African American film director whose career began in the silent era. An unlikely combination, perhaps, but Stace England and company draw plenty of inspiration from Micheaux, who challenged racism in more than 40 movies. England’s long-standing interest in African American history (he previously made an album about a former slave house) enriches his latest effort. In some songs, including “Veiled Aristocrats” (about light-skinned blacks passing for white), he tackles the issues head on; in others, such as “The Betrayal,” he does it indirectly. Either way, the high lonesome voices and scalding electric guitars are stirring.