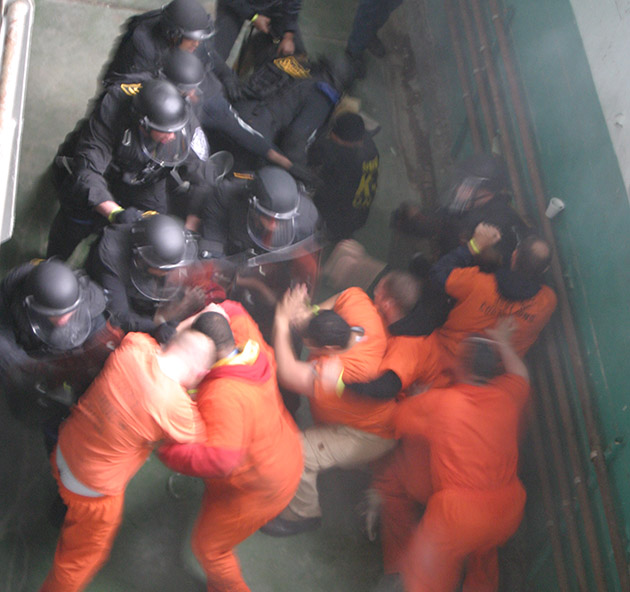 Any minute now, Cell Block J is going to blow. My gang has occupied the long cement gallery outside our cells and we’re itching for a fight. There are 11 of us, and we’ve amassed a small arsenal of shivs, cement blocks, bottles, slings, and even a firearm or two. Our toughest-looking guy is armed with a toy pistol, a tennis ball wrapped in a white tube sock, and a plastic bottle containing a murky brown liquid. (Molotov cocktail? Nope—”It’s for my chew.”) He’s here for his sixth year; the rest are criminal-justice students eager for hands-on experience. “Corrections is an easy three credits,” a shank-wielding grad student tells me.

A hulking prison guard in full riot gear drops by to brief us on our imminent ass-whupping. He calmly explains that he and the Disturbance Control Team from the Federal Correctional Institution in Elkton, Ohio, are going to do “whatever is necessary” to get us back under control. “We will respond to force with force.” That includes shooting at us with pepper balls—okay, they’re actually filled with talcum powder, but they still sting like hell. “We’ll start with your legs and work our way up,” he says. When we get hit, we might want to gag or cough—for realism’s sake.

He leaves. My fellow inmates are giddy with anticipation. “This is gonna be awesome!” one declares.

Welcome to the Mock Prison Riot. More than 700 corrections officers from across the country and as far away as Singapore and Australia have come to a decommissioned maximum-security prison in Moundsville, West Virginia, to observe and put down nearly 60 simulated riots over the course of three days. The event, put on by the National Institute of Justice and held every May, promises “real-world conditions,” and the 133-year-old grounds, complete with 25-foot stone walls and honeycomb tiers straight out of The Shawshank Redemption, more than deliver.

Before suiting up in Gitmo orange, I ask a 30-year corrections vet how to best portray a rioting prisoner. His advice: “Do whatever a corrections officer says as soon as he says it. Only the knuckleheads keep going.” I’m confused—isn’t noncompliance the whole point of rioting?

Down in the cell block, I soon realize that he knew what he was talking about. Without warning, a flash-bang device and a yellow smoke grenade explode at the far end of our gallery, and a phalanx of 14 guards with riot shields and gas masks rushes in. I lamely toss a couple of foam bricks and am rewarded with a talcum ball to my right foot. I drop to the floor, do some perfunctory coughing, and watch as chaw guy clicks his toy gun wildly from a nearby cell. The guards drop the holdouts one by one, the floor vibrating as they march in formation down the gallery.

Now they’re angrily shouting at some knucklehead, “Prisoner! Move back toward the formation! NOW!” A talcum ball slams into my right calf—they’re talking to me. I slide backward, prone, until four hands grab me, pull my hands behind my back, roughly pat me down, flip me onto my back, yank me to my feet, and push me into a cell. I’ve been cuffed and stuffed.

The last real riot in Moundsville took place in 1986. Upset about a strict new warden and dismal living conditions in their five-by-seven cells, inmates took 16 guards hostage and held the penitentiary for two days. The prison shut down for good in 1995, based on a court order citing conditions that amounted to cruel and unusual punishment. The area’s Democratic congressman, Alan Mollohan, earmarked funds to establish a law-enforcement training facility in the old prison, where the first mock riot was held in 1997. Since then, the event has become a convention of sorts for corrections officers, complete with a bustling trade show.

In between riots, I check out the wares—Top Cop pepper spray and Hornets Nest sting grenades. Cell Hound mobile phonedetection system. The Apprehender, a wishbone-shaped handcuff on a stick. In the yard, a vendor demos a series of progressively more percussive explosive devices. Getting ready to detonate the 185-decibel model, he cheerfully promises that if you slide it into a cell, “they’ll be unable to tell you their name for 45 seconds.”

Most of the weapons on display are described as “less lethal,” a lawyerly phrase that covers all manner of stunning, choking, and shocking. “Better living through electricity!” cracks Sergeant Joe Gillespie, an Illinois CO manning the booth for Nova Products, makers of a riot shield with an electric stun feature. In the past year, he says, he’s taken the shield out on the job on at least 20 occasions; every time, he got prisoners to comply simply by brandishing it. He offers to zap me. I decline, passing up my first of many chances for voluntary electrocution.

Every couple of minutes, a distinctive clicking sound rises through the hall, followed by cheers. Over at the Taser booth, a crowd has formed as reps hook up electrodes to the legs of volunteers who have signed a two-page waiver. A succession of beefy guys gets hit with a five-second jolt that instantly reduces them to a heap of Jell-O spewing f-bombs. A Taser spokeswoman keeps track of the day’s “hits” via Twitter: “Wow, what a crazy day! Over 200 #TASER exposures @ #mockriots.”

Inside the cell blocks, guards and vendors line the tiers to watch the organized chaos below. I ask Tony Lawrence, a CO from Ohio, if the rapid-fire riot we just watched was convincing. “Nah,” he says. In the real world, “that would be over a lot faster.”

“With all the less-lethal weapons and the other technologies out there today, you’re pretty much subdued before they get to you,” says Kevin Maloney, who’s spent a dozen years perfecting his role as a “professional inmate.” A 32-year-old former employee of the federal Office of Law Enforcement Technology Commercialization, a former mock riot cosponsor whose mission is pretty much as its name suggests, he’s now brought in as a ringer to portray the “1 out of 99 that is immune to pepper ball or the one that got a little bad hooch from one of his cellies and is all jacked up on something.” He plays for the crowds, cracking jokes and singing “Kung Fu Fighting,” but occasionally teaches the guards a trick or two. During a cell extraction exercise, he convinces a CO to raise his face shield and then throws talcum in his eyes. “Never lift your mask!” Maloney chortles.

Maloney says the guards he’s met over the years tell him he does a convincing job playing “that certain guy” who makes their jobs hell. That’s a compliment for a guy who’s never set foot in an actual prison. “I have to give a lot of credit to shows like Oz,” he says.

In the early years of the mock riot, the volunteer prisoners would be locked in the cells for a few hours and would negotiate with the guards before things came to a head. Today, this Stanford Prison Experiment-type immersion approach has been replaced by an exclusive focus on rapid-response training.

Questions of why prisoners do—or don’t—revolt aren’t really on the agenda, and I come to realize that trying to raise them here is a bit like trying to discuss diplomacy at a nuclear test site. Why do prisoners act up? I ask a supernice supermax guard who’s spent much of the past nine years working the “total seg” unit. “Some are just bored,” she says. “Some are just bad.” What about conditions? I mention that California’s prison guards union has complained about overcrowding because they fear for their own safety. (In August, just days after federal judges decried the state’s jam-packed prisons, 55 inmates were hospitalized after a riot at the pen in Chino, which was at 197 percent capacity.) She is unimpressed. “Personally,” she says, “I think they all should be in places like this.”

Surprisingly, even as their populations have swelled, America’s correctional facilities have become noticeably less violent. “The problem of riots and disturbances is not completely solved, but it is way below what it had been,” says Bert Useem, a Purdue sociologist who’s studied prison riots for three decades. The statistics bear this out: In 1972, the year after 29 prisoners and 10 guards were killed at Attica, there were more than 90 prison riots nationwide, yet by the mid-2000s, Useem writes, “prison riots had become rare.” And non-riot-related violence has waned too. Between 1995 and 2008, inmate violence in New York City jails dropped 95 percent.

Not that all is well behind bars, of course. Useem notes that prisoners now have far less access to rehabilitation and other programs than they used to. But the management is more professional than it was 40 years ago. And an orderly prison, even if insanely crowded, is usually a less violent one.

At least if you don’t count less-lethal force. Last year, a report by the Commission on Safety and Abuse in America’s Prisons, a project of the Vera Institute of Justice, noted that some facilities have adopted a “first strike” policy, using weapons such as pepper spray and Tasers before even trying to negotiate. “Steady decreases nationally in riots and homicides,” it concluded, “do not tell us about the much larger universe of less-than-deadly violence.” Between 2005 and 2007, the federal Bureau of Prisons recorded a 50 percent increase in the use of pepper spray.

Cell Block J is calm again and smelling like a freshly diapered baby, so I catch up with a prisoner named Dave Hardy as he wipes the talc from his face. A 36-year-old criminal-justice student from Weber State University in Utah, Hardy spent 10 years as a CO in juvenile lockups, and he hopes to go into prison administration. “It’s good to know what it’s like to be under fire,” he says. “You think about the Eighth Amendment—cruel and unusual punishment—it’s that balance.” What’s the line between necessary force and cruelty? he asks. Sixty pepper balls? Six hundred? He also wonders why so few guards have signed up to play prisoners. “To feel the fear of an inmate is what every one of these guys should go through.”

I consult my schedule listing the day’s remaining disturbances. Twenty inmates are needed in the dining hall for a food fight gone horribly wrong, and I’d better get there before the knuckleheads get all the good weapons.