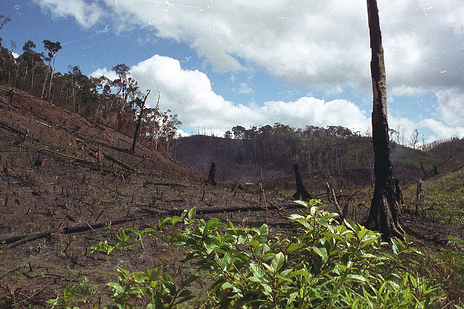 About a week before President Obama is scheduled to attend the climate conference in Copenhagen, he’s already making some discouraging statements about climate change mitigation strategies. The Guardian reports that after receiving his Nobel Peace Price this morning, Obama said that avoided deforestation projects, like the ones proposed in Brazil and Norway, are “probably the most cost-effective way for us to address the issue of climate change—having an effective set of mechanisms in place to avoid further deforestation and hopefully to plant new trees.”

He’s right that avoided deforestation is cost-effective. It allows developed countries to opt out of emissions restrictions and developing nations to collect subsidies while protecting their abundant natural resources. But Obama needs to read more Mother Jones. In our current issue, Mark Schapiro reports from a 50,000-acre reserve in Brazil’s Atlantic rainforest that has been protected on behalf of three of America’s largest carbon emitters: General Motors, Chevron and American Electric Power. This preservation project comes with an unintended cost, displacing the indigenous population that has lived off the land for generations. In many cases, small farmers are being arrested for cutting down a tree for construction or firewood so that American companies can dodge emissions restrictions.

The Guardian says that the carbon sink plan, dubbed Reduced Deforestation and Degradation (REDD), is critical for Brazil because its deforestation is responsible for a large portion of the world’s forest emissions and “it has the largest swath of trees in the world and therefore stands to make more money than anyone else by protecting them.” That’s true, Brazil and American corporations have a lot to gain from avoided deforestation; they can essentially say they will cut down the rainforests unless they’re paid not to. So let’s hope they don’t take the world hostage just to make a buck.