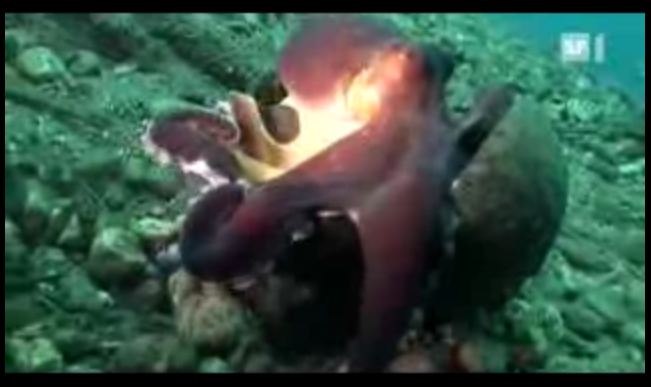 If you’ve been following developments in Copenhagen and find yourself doubting primate intelligence, check out the cephalopods, widely regarded as the smartest of the invertebrates. A new paper in Current Biology details the first scientific report of invertebrate tool use in the charismatic little octopus Amphioctopus marginatus, the veined octopus, who has a habit of carrying multiple coconut shells around (awkwardly, you’ll see). This cumbersome behavior turns out to be well worth the trouble when the octopus deploys its coconut shell as a magical, instantaneous cloaking device.

I found the footage on YouTube, and although I don’t speak German I can pretty well understand what they’re talking about. I think.

During 500 hours of observation underwater, the Australian and Brit researchers report some veined octopuses traveling considerable distances—up to 20 meters—while carrying stacked coconut shell halves under their body, an ungainly motion the researchers call stilt walking. The only benefit of stilt walking to the ocotopus is to use the shells later as a shelter or a lair—a different strategy from a hermit crab living inside the discarded shell of a snail. The authors explain:

[The octopus behavior] highlights a key feature of widely used functional definitions of tool use—simple behaviours, such as the use of an object (or objects) as shelter, are not generally regarded as tool use, because the shelter is effectively in use all the time, whereas a tool provides no benefit until it is used for a specific purpose. This rules out examples such as the use of gastropod shells by hermit crabs, but includes situations where there is an immediate cost, but a deferred benefit, such as dolphins carrying sponges to protect against abrasion during foraging, and where an object is carried around in a non-functional form to be deployed when required.

So, if octopuses can think ahead and be prepare themselves for abstract threats and needs, why can’t we?