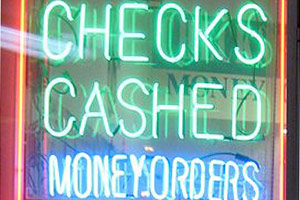 Their storefront locations with neon signs usually occupy the most impoverished, minority-populated parts of town. No, I’m not talking about liquor stores, but payday lenders—that fast cash industry that uses loopholes and exorbitant interest rates to prey on the vulnerable. North Carolina outlawed the industry in 2006, Washington D.C. followed suit in 2007, and this week, thanks to a coalition of six local credit unions devoted to derailing predatory lending, San Francisco will launch a low-cost alternative loan program called PayDayPlus SF.

Its 13 locations will open just weeks after a Federal Deposit Insurance Co. report found that 25.6 percent of U.S. households—that’s 60 million adults—either lack bank accounts or use payday loans and check cashing services in lieu of banks. The majority of these folks are black, American Indian, and Hispanic, the report shows. And that’s exactly the demographic PayDayPlus SF aims to target, says Leigh Phillips from the San Francisco treasurer’s office.  The city is the first in the U.S. with a program designed to bring disenfranchised residents into the financial mainstream. Basically, it has created a local banking system to respond to low-income people’s needs and means. PayDayPlus SF is an off-shoot of the program and will cover check cashing and payday loans. “There are a couple of people that PayDayPlus SF’s trying to reach,” Phillips says. “They are people who need access to emergency funds for a car repair, people who don’t have access to credit cards, who don’t have credit ratings to get one, people who are trapped in the payday debt cycle.”

So how does someone get caught in the payday trap? The Center for Responsible Lending, one of PayDayPlus SF’s advisors, details how a typical $300 loan with a $45 fee and an annual interest rate of 459 percent—say, from Money Mart—can sucker a borrower who’s paid the rent, but maybe still needs to cover the utilities and buy some groceries:

[M]ost borrowers cannot afford to pay the loan back and still make it to the next payday. But if the check is not covered, the borrower accumulates bounced check fees from the bank and the lender, who can pass the check through the borrower’s account repeatedly.

To counter this system, PayDayPlus SF’s credit union partners will loan borrowers $50 to $500 at a maximum ARP of 18 percent, a drastic shift from the current rate. And says Phillips, “With our product you have up to 12 months to pay back the loan, so it also means that you can build credit.”
But beyond just giving people access to better credit, Phillips hopes the new system will mobilize the community against predatory lending.