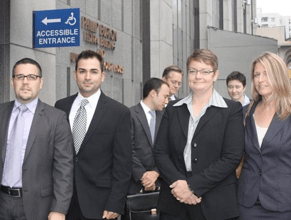 Even though official broadcasts of the Prop 8. trial in San Francisco won’t be appearing on YouTube anytime soon, a couple of ambitious filmmakers have decided to reenact the whole shebang for the sake of public record.

Here, in response to the contentious Supreme Court ruling, John Ireland and John Ainsworth make use of a replica courtroom in Los Angeles and a team of professional actors to bring the trial to life:

Meanwhile, in an interview with The Advocate, Ainsworth and Ireland get down to brass tacks, discussing their intentions: To provide a nonpartisan “extension of the historical record” by drawing upon court records and first-hand accounts from bloggers.

What do you think, Riff-raff? Is this reenactment a stroke of subversive genius? Partisan or nonpartisan? Could this only happen in LA? Are the actors and actresses involved infinitely more attractive than their real world counterparts? Will James Franco sign on to the project in order to further his performance art career?