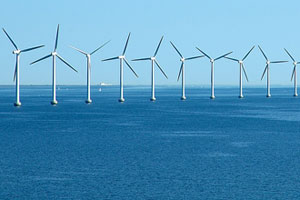 Cape Wind, the hotly contested proposed offshore wind farm in Massachusetts’ Nantucket Sound, suffered a major setback on Monday when the National Park Service (NPS) announced that the site should be eligible for protection as a historical place. While the decision is being touted as a victory for two Massachusetts Native American tribes, the big winners may well be the dirty energy interests that have been working for nearly a decade to block the project.

The determination that the Nantucket Sound is eligible for listing on the National Register of Historic Places, which Andy Kroll wrote about over on Blue Marble, is only the latest setback for the proposed 24-square-mile, 130-turbine wind farm that would be the first offshore project in the US.

The New York Times gave a good rundown on this latest roadblock, which was spurred by a request from two local tribes that claim the turbines would impede their religious practice by blocking the view of the sunrise and intrude on historic burial grounds. But what the Times fails to mention is that the bulk of the opposition to Cape Wind over the years has come from a multimillion-dollar campaign backed by oil and gas money—not Native Americans trying to protect territory they regard as sacred. At the forefront of the effort has been William Koch, who alone has spent more than a million to oppose the farm via a group called the Alliance to Protect Nantucket Sound.

Koch is the founder and president of the Oxbow Group, and has made his fortune off mining and marketing coal, natural gas, petroleum, and petroleum coke products. He’s the son of Fred Koch, founder of oil and gas giant Koch Industries, and brother of David and Charles Koch—who have supported conservative groups like Citizens for a Sound Economy (which later merged with another group to form FreedomWorks) and Americans for Prosperity, which has campaigned against both climate legislation and health care reform. Bill Koch used to work for the family business, but split off in the early ’80s, prompting a nasty feud with his brothers business that dragged on for nearly two decades. In that time, however, he built a dirty energy empire all his own, which has helped fund his Cape Wind crusade.

The Alliance was founded in 2001 with the sole purpose of defeating the wind farm. Koch, a billionaire fossil-fuel tycoon and yacht enthusiast, has given at least $1.5 million to the Alliance and related efforts to defeat the project (as of 2006, that is—how much he’s given since then is unknown), which would be visible from his home in the Cape Cod town of Osterville. Doug Yearley, the former CEO of mining giant Phelps Dodge and a member of Marathon Oil’s board of directors, was also highly involved in the Alliance up until his death in 2007.

Koch and his wealthy friends in the area are responsible for more than 90 percent of the contributions to the Alliance, and fundraising documents released in 2006 showed that those major donors gave between $20,000 and $1 million each. In just the last three years the Alliance has brought in $8.6 million, according to its IRS forms. It has spent $2 to $3 million a year to fight Cape Wind. In a 2008 fundraising letter to its wealthy supporters, the Alliance promised that it “will do what whatever it takes to win. We will never allow Cape Wind to become a reality.” Despite all the income from well-heeled dirty energy interests like Koch and Yearley, the Alliance describes itself on its tax forms as a “nonprofit environmental organization.”

Though they have different stated concerns, Koch, the Alliance, and the tribes have united in opposition to Cape Wind. Yet both Audra Parker, president of the Alliance, and representatives of the tribes deny that they are mounting a coordinated campaign. Parker called the idea of them working together “media spin.”

“The tribe does not work with the Alliance,” Chuckie Green, tribal historic preservation authority and assistant natural resources director for the Mashpee Wampanoag tribe, told Mother Jones. “The tribe has no connection, except for the fact that we’re two groups going in the same direction. They’re for different reasons.”

The tribes surely have perfectly sound reasons of their own for opposing the project. “We are hoping…that we can protect the sound and our religious right to worship the rising sun and be able to pass that tradition on to our grandchildren,” Green said. “The government has not honored many of the things it has promised to the Native American people…All we have is the process, and all we’ve asked for is due process.”

That’s clearly a consideration for the Department of Interior, which oversees NPS. To that end, the Interior Department recently issued a new tribal consultation policy, a long overdue effort to improve the agency’s relationship with tribes.

But in the case of this particular decision on Cape Wind, granting this level of preservation to an entire body of water could be a bad omen for all future offshore wind development. Barring development here, Cape Wind president Jim Gordon told Mother Jones recently, “would have a chilling effect on what could possibly be one of the most promising sources for energy independence and creating a new green economy.”

Gordon envisions wind as a major source of power going forward—and his Cape Wind project as one of the pioneers. Gordon ticks off the problems facing the region, like eroding beaches, an acidifying ocean, and the decline of Cape Cod’s namesake fish. His project, he says, should be seen as part of the solution for all those problems. “Cape Wind is really about trying to contribute to these energy, environmental, and economic challenges that this region faces,” said Gordon.

As Gordon notes, the delay on the project has come from a relatively small number of people opposing it. Meanwhile, it has the support of Gov. Deval Patrick, along with the majority of state residents, the state legislature, and the state’s congressional delegation. “How can such a small opposition group hold up America’s energy future?” asked Gordon.

The NPS decision isn’t the final nail in the coffin for Cape Wind. Interior Secretary Ken Salazar has said that the tribes and Gordon have until March 1 to reach a compromise. But it is another hurdle for a project that proponents say could herald a renewable energy future.