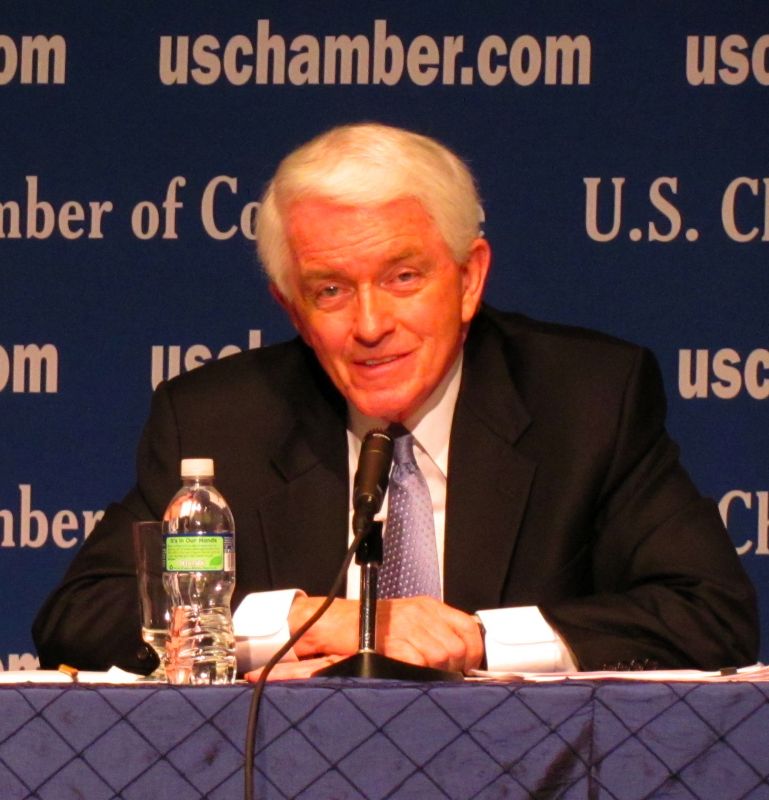 Chamber of Commerce President and CEO Tom Donohue indicated on Thursday that the organization is mulling a legal challenge to an Environmental Protection Agency finding that greenhouse gases endanger human health and should therefore be subject to regulation.

“Are we going to sue the EPA on the endangerment finding?” Donohue said at a press conference following a speech on the State of American Business 2010. “Maybe.”

“There are a number of options and processes available both in the courts and in other parts of government,” he added. “We will not stand still and let the endangerment finding, as narrow as it was intended to be, stand, since it has declared now that CO2 is a pollutant.”

Donohue maintained that the Chamber isn’t disputing the idea that carbon dioxide is a threat to human health (although in the past it has done just that). The Chamber just doesn’t think the EPA has the legal ability to restrict emissions (even though the Supreme Court ruled in 2007 that it does). The EPA’s efforts to curb carbon pollution, he said, amounts to “a retirement program for, amongst other things, class action lawyers.” “We’re not arguing the science. This is a legal issue, which basically hands the whole thing over, everything companies are doing everywhere, to the trial lawyers, so we will take some constructive steps,” he said.

The Chamber has never been shy about unleashing trial lawyers to thwart environmental legislation. Bill Kovacs, the chamber’s vice president for environment, regulatory and government affairs, infamously called for a “Scopes Monkey Trial” on climate change as an alternative to suing the agency. And last September the Chamber filed suit against the agency challenging California’s right to set higher automobile emissions standards than the federal limits.

Donohue said the Chamber is keeping a close watch on Senate and House efforts to block EPA restrictions on greenhouse gases. He insisted that the Chamber prefers that Congress pass a bill on climate change, rather than letting the EPA take the lead. But he also downplayed the idea that Congress will get around to passing a law anytime soon—and reaffirmed the Chamber’s opposition to the leading measures circulating on Capitol Hill.

The House climate bill, he said, would “tie economic activity in knots and eliminate jobs from one end of the country to another,” and does not have the votes to pass in the Senate. “Just about everybody in the Democratic side of the Senate is up there running away from having to deal with this in the same year, and before an election, at the same time as they are dealing with health care and capital markets regulation,” he said.

When asked what kind of climate legislation the Chamber of Commerce might support, Donohue gave few details. Instead he merely listed portions of the current bills that he doesn’t like, and said the organization would support a “reasonable price on carbon” and “rational regulatory certainty” rather than “stupid regulatory certainty.”