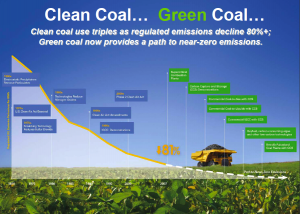 In recent years, the coal industry has worked hard to convince us that coal is “clean.” Now, they’re going one step further and claiming that it’s “green.” Last week, a veteran climate change denialist pushed this idea to Obama administration officials and congressional staffers.

In a policy briefing sponsored by the United States Energy Association, Fred Palmer, a coal industry lobbyist and notorious climate change denier, touted the wonders of “green coal” as a “path to zero emissions.” Greenpeace’s new PolluterWatch program—a kind of oppo research team targeting global warming skeptics and energy interests—managed to sit in on the talk, which it said was attended by close to 100 administration and congressional staffers and policy experts.

Palmer has a solid history of undermining climate science on behalf of big polluters. He’s the head of government affairs at Peabody Energy, the world’s largest coal company, and was formerly president of the Western Fuels Association and chairman of legal affairs for the National Mining Association.

At the Western Fuels Association, Palmer headed the Greening Earth Society, which claimed that increased emissions would actually help ecosystems and economies. He even argued in an interview that “every time you turn your car on and you burn fossil fuels and you put CO2 into the air, you’re doing the work of the Lord.”

With his new call for zero emissions via “green coal,” it seems Palmer has put the Lord’s work on hold. (A cynic might wonder if that’s because Peabody is among the many coal companies lining up for massive funding for carbon-capture-and-storage technology). Instead, he’s now touting coal as a “low-carbon” solution and the “fuel of social progress.” One of his slides lists these “simple truths” about coal: