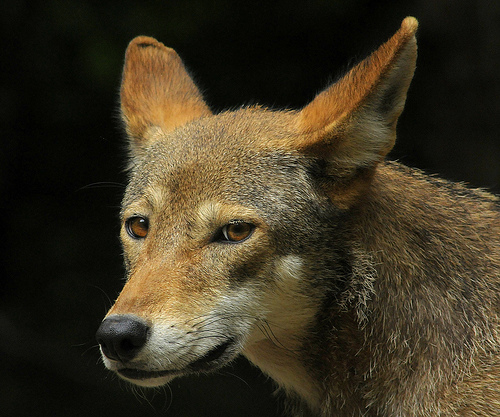 While much has been published about the Department of Interior’s dealings with the grey wolf, the red wolf has gotten much less attention. The red wolf (canis rufus) has been in North America since the end of the ice age, and is one of only two wolf species on the continent. For most of the last century, the red wolf lived in the southeastern part of the US, feeding on small mammals like mice and raccoons and taking down the occasional deer. Although red wolves are fearful of humans and generally only hunt at dawn and dusk, they did eat some livestock and by the 1960s, predator eradication programs and loss of habitat had reduced the red wolf populations significantly.

Despite being listed as endangered species in 1973, by 1980 there were only 17 known remaining red wolves and the species was declared extinct in the wild. However, captive breeding programs have been successful and there are now about 200 wolves in captivity and 100 individuals in the wild.  In 2008 the red wolf had a major victory as citizens and activists defeated the Navy’s plan to construct an airstrip through its protected habitat inside a North Carolina wildlife refuge. Currently, there are about 20 packs of red wolves living in North Carolina, the only state known to have a wild population of the animals.

One of the key threats to the red wolf is interbreeding with coyotes, a problem which biologists have attacked in various ways, such as sterilizing coyote-wolf couples and their hybrid offspring. Another approach is to secure red wolf-only packs, allowing the wolves to defend their own territory (and thus their genetic diversity, the thought goes) from outside predators like coyotes. This program could be modeled after the example of grey wolves: after grey wolves were reintroduced to Yellowstone, they killed nearly half the park’s coyote population in just a few years and will kill any coyotes that invade their pack’s territory. If the example of the grey wolf is any indication, wolves are resilient and recovery is possible, but just cause you make it off the endangered species list, doesn’t mean you’re out of the woods.